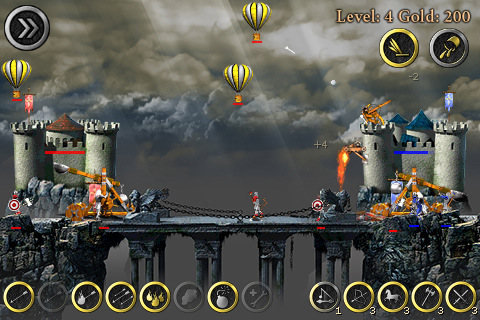 Medieval, created by Briskmobile, is a castle defense game in which you must force the opposition to say “uncle!” by either blowing their castle to kingdom come, completely slaughtering their oncoming troops or by stealing their flag.

You control a huge bow on top of your castle and you must shoot arrows at the advancing forces. The enemy will come at you with everything they have: knights, soldiers, balloons, catapults and etc. You have to defend against them with your bow and army…

Controlling the bow is done by using 3 interesting techniques, the Auto-Fire, Show Arc and Drag Fire.

The Auto-Fire is simply done by just pointing at the enemy. The Show Arc, shows the line of fire for your arrows and gives you a 10% gold bonus if used. And the Drag Fire method is in which you must use your finger to manually fire your bow, giving you a 20% gold bonus.

Each hit against the opposing castle and the troops will award you money. I noticed that if you got headshots (oddly they never died) you would get the most gold, but sometimes I got a lot of gold by hitting their feet too. Once you get enough gold you are able to buy upgrades to your weapon such as more damage, faster reload times or other weapons such as fire arrows, boulders and exploding arrows.

You can also create military units such as catapults, knights, archers, soldiers and etc but you must first buy the ability to make these units and then have to spend additional gold to create them.

So for the first time, I was buying knights and soldiers but they just died too early and after level 21 the game became too difficult. So I recommend first upgrading all your arrows to the max and then think about offense later.

The graphics in this game are amazing! The beautiful 3D moving background and the attention to detail for the soldiers and castles are nice as well. I particularly loved how the fire looked on the fire arrows and hot oil.

I have to say, I honestly love this game. It is really addicting and doesn’t cause me to get pissy like the other puzzle games I reviewed… one thing I complain about is the lack of blood.

Seriously, for all the guys I killed, can’t I get a little speck blood? Anyways this game is only $.99 in the App Store. I’d love to hear what you guys think about it.