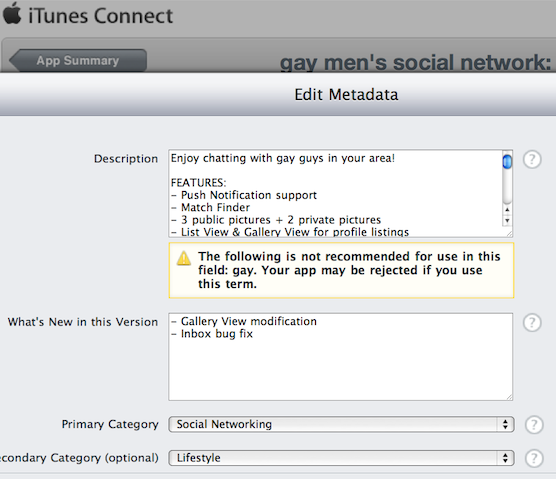 We already knew that the app approval process could be somewhat random. Some apps that shouldn’t be approved in the first place manage to show up in the App Store, while others that shouldn’t have any problem are rejected, sometimes for false reasons. In the end, Apple is always right: their store, their rules, right?

But what if Apple decided to reject applications simply because they contain the word “gay”? It seems that’s what the developer of a gay networking app has discovered while submitting his application for review…

At first, I thought it was one of those unfortunate incidents that happen all the time in dealing with Apple. However, when I was editing my app’s management page on Apple’s website, I encountered the following warning message:

“The following is not recommended for use in this field: gay. Your app may be rejected if you use this term.”

It seems reasonable that Apple is trying to remove the word “gay” from the App Store. Now I believe this is more than Apple just squashing a small iPhone app developer, but a matter of human rights. I will work to obtain Apple’s word that no app will be rejected just because it contains the word “gay” in their app description. I have asked the App Review Team an explanation regarding this matter, but as of writing this notice, I haven’t received a response.

There are plenty of applications in the App Store with the word “gay” in the title or app description, so why would they not recommend using this word?