I love it when a simple app idea is executed beautifully. Take Five, by the Iconfactory, is no exception. The idea is simple. Take Five is intended to solve a problem that occurs often for certain types of people. When I say “certain types of people,” I mean forgetful ones (aren’t we all to some degree). The app does one thing and one thing well; it controls a timer for your music.

The scenario that Iconfactory uses on the Take Five site is a scenario that most of us have probably been through. You’re listening to your music while you’re doing work, you are either interrupted or distracted, then you eventually return to your work and forget to turn your music back on. Hours later you realize you’ve been listening to silence. That sounds like a pretty trivial problem, right? Well, it seems to me that the most frustrating problems in life are the repetitive and trivial ones. Take Five plans on fixing at least one of those problems…

There really isn’t that much to Take Five. No preferences. No setup. You simply open the app and choose a playlist from your iPod to play. Take Five works just like a normal music player; all of your music controls and song info are right there at your fingertips along with your album artwork. The only thing added is a slick, new “slide to pause” bar under the music controls.

So, you’re hard at work while enjoying some music and you’re distracted by a coworker. Instead of pausing your music, you simply slide the “slide to pause” bar and quickly set the time that you want your music to resume. 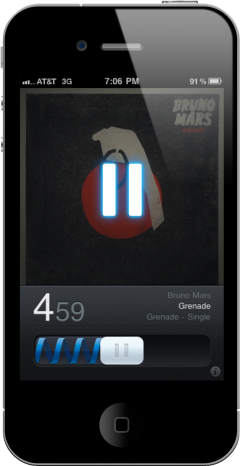 When you come back to your cubicle after your coworker has shown you the newest LOLcat video on Youtube, your music resumes when the timer expires.

That’s it. Pretty neat, huh? I’ve found the timer slider to be incredibly intuitive. It’s almost like it feels the intention behind your finger. I know that sounds weird, but use the app and you’ll know what I’m talking about.

Take Five is a very nice app. But there are a couple things I think could be added to make it perfect:

Besides that, Take Five is about as darn good as it can get. Multitasking and retina display are supported. The app is super fast everything is incredibly responsive.

Take Five isn’t for everybody. If you haven’t had the problem of forgetting your music, then there’s no real point in downloading the app.

However, if this problem does ring true for you, Take Five is a must download. Pick it up in the App Store for only $0.99. You can also follow Take Five on Twitter for updates and support.

Have you had this problem of forgetting your music? What do you think about Take Five?