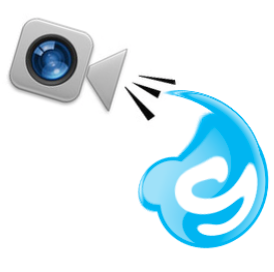 Given the impressive adoption numbers of the iPhone on a weekly basis, I’m simply stumped as to why Skype isn’t taking the iPhone platform more seriously.  Sure, they have an app, but it’s almost like they created it just to say they have an app in the App Store.

Skype has almost single handily revolutionized what it means to communicate in today’s digital world, and they’ve made it infinitely easier for ones across long distances to stay in relatively close touch with one another. So why is Skype resting on its laurels? Is this the attitude of a company who’s simply satisfied with its accomplishments thus far?  Does having 1 in 11 of the world’s population among your growing list of users result in stifling innovation? We examine the situation inside…

Without a doubt these are all questions that a growing number of folks are wondering, while we’re still left without a full featured Skype mobile app.  With yesterday’s announcement and subsequent beta release of FaceTime for desktop Mac platforms, this signaled a direct and full on assault against Skype’s empire.  This is what Skype does.  This is what Skype perfected. Now their space is being seriously threatened for the first time.

Video chat is accepted among the masses, amongst grandmas and grandpas the world over, all because of Skype.  So, it’s baffling to watch as mediocre updates trickle out without so much as a subtle hint about the company’s future intentions for the iPhone. One thing that has been hinted about is the recently released Skype app for the Android platform, but even that statement was partially retracted concerning actual video calls.

In 2010, Skype isn’t going to suffer any repercussions for their lackadaisical attitude, but give it a few years and it certainly could come back to bite them.  There’s really no excuse for the position that they find themselves currently in, as there has been more than enough time to build upon the groundwork that they’ve already established on the iPhone.

Remember, it wasn’t that long ago that Internet Explorer once dominated web browsing, but eventually better solutions came along, and Microsoft didn’t keep up with the innovations of their competitors.  Now their market share in the browser space is indicative of their mistakes from yesteryear. Skype, you’re currently playing with the same fire.

With a rapidly growing user base, FaceTime has several advantages over Skype that could eventually spell its trouble in the long run.  Number one: FaceTime is totally native on iOS devices, and eventually will be native on the Mac platform as well.  That equals millions upon millions of new users, pretty much over night.  Number two: You don’t even have to create an account to use FaceTime, so that’s one less hurdle for Apple to overcome.

Finally, Apple has the vast marketing resources to really push this feature to the next level.  Sure, Skype has done a fairly commendable job in this area, but their campaign has been more of a grass roots initiative than anything.  Apple has the dollars to throw into the advertising ring, so once they establish that groundwork across all of their platforms, it could be a hard ship to bring to shore.  And believe it or not, it’s not too far fetched to envision FaceTime existing in the living room, courtesy of the Apple TV.  Apple’s sold a quarter of a million of those devices in a little less than a month, with plenty of foreseeable momentum.

The final frontier for FaceTime will of course be Windows machines, and I think that’s a strong possibility to happen sometime in 2011.  It happened with Quicktime, it happened with iTunes, it happened with Safari, why not FaceTime?  If that comes to fruition, five years from now you could be looking at a different landscape in the video calling arena.  From there, it’s only a matter of time until Apple enables traditional phone calls for the service as well.

If FaceTime ends up being the dominant video calling solution, analysts will surely pinpoint 2010 as the period when the pendulum began to shift away from Skype, and towards Apple. You can’t say Skype didn’t have the time to fix things. You can’t say they weren’t warned.

What do you think? Are you sick and tired of waiting for video calling via Skype on your iPhone?