A new report by comScore shows that the iPhone is losing ground on Android in the US smartphone market. RIM (Blackberry) still has the most market shares, Apple comes at the second place and Android is 3rd.

Even though the rankings remain the same, RIM and Apple’s share of the market decreased to the advantage of Android, which increased by 5 points. While boring, these numbers are a sign of what’s to come… 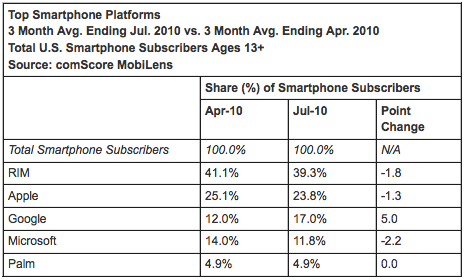 When you think about it, these numbers make sense. RIM is losing the smartphone battle. Lack of innovation and boring devices are the cause of it. The cause for Apple’s market decrease is Android itself, which is not only available on more carriers, but is also not limited to only one device, like iOS is limited to the iPhone. In other words, if there were 5 different iPhone models coming out every year on several carriers, Apple would most likely be heading the charts of this report.

I don’t worry the least bit for Apple though. Historically the company has never gone after market shares and I doubt they have any interest in “owning” the market. They want to increase their profit margin by selling one very good phone at a very expensive price. That’s what they do in the computer market and they seem to be doing pretty well.