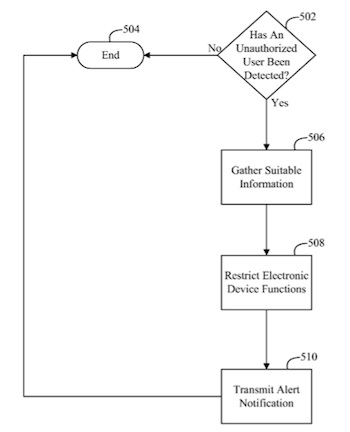 Last week iDB reported that Apple had filed for a patent that would grant them the ability to remotely wipe and disable your iPhone. According to Mac Rumors the concerns surrounding this ability continue to grow.

The vagueness of the term “unauthorized user” combined with leery methods of detection have some users questioning the control this would give Cupertino. Facial recognition, heartbeat detection and fingerprint analysis are among the ways listed of identifying whomever is in control of the handheld in question…Theoretically, jailbreaking your device could make the use of your iDevice unauthorized since it is widely suspected that in doing so you are actually voiding your warranty. The Register (UK) mentioned the following scenario:

Ignoring the possibility that a false positive in Apple’s proposed theft protection might activate the spy cam while the user is in the bath, or in the middle of some other intimate moment, this technology seems Orwellian for another reason: It gives Steve jobs and Co. the means to retaliate when iPhones aren’t being used in ways Cupertino doesn’t expressly permit.

But remember, it’s for your own good.

To bring us back to Earth we should mention that the February filed patent could just as likely be designed to increase security capabilities in applications such as Find My iPhone. If this turns up being nothing it wouldn’t be the first time Apple has filed a patent that never materialized on the streets. That being said, this particular ability seems too juicy to remain idle.

We’ll keep you updated on any advancements surrounding this story as they surface. Until then, ask yourself if the concerns you hear of are warranted. Would giving remote access to Apple in a patent be overstepping the consumers right to privacy? Or is it that very privacy that Apple is trying to protect? Let us know your thoughts in the comment section below.