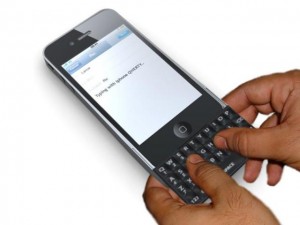 Do you remember last year when Mobile Mechatronics released a physical keyboard that attached to the iPhone 3G and 3GS called the iTwinge? It turns out that it was a big enough hit for another company to put the click button feel to the iPhone 4.

A designer by the name of Altamash Jiwani has created a prototype that is a bit more complex than the previous accessories. The design resembles the Apple Bumper with the keyboard on rails that make the home button clearable with a slide. It would disable the functionality of the keyboard by way of its dock connect-ability. Not stopping there, the bottom would serve as a female dock port which would allow syncing without removing the keyboard.

Many people who love the iPhone’s touchscreen still complain about the lack of “real” buttons. This would seem to solve their need. Should such consumers just buy a Blackberry type device, or do you think this product would suffice?