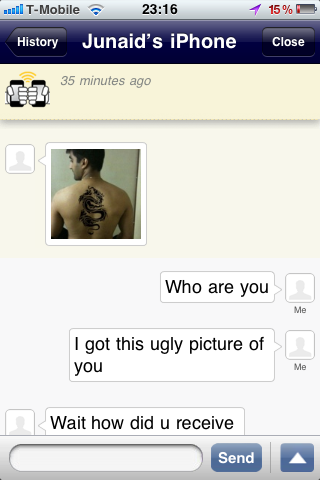 I just got an email from Gurps, an iDB reader who tells me his story about Bump, an application that lets you share images, contacts, and more simply by bumping 2 iPhones into each other. Here is part of Gurps’ story:

Basically, I was sitting in my room, introducing my sister (a new iPhone user) on the Bump application. I proceeded to send her some photos. Occasionally it didn’t work since it said only one of us had bumped, but we did have some success. Then, we bumped phones again and a message popped on my screen saying, “Connect with Junaid’s iPhone”, obviously not my sisters name, but I clicked yes anyway. I ended up receiving a picture message from someone totally random, that I’ve never met in my life.

After looking into it, Gurps found out he was receiving pictures from a guy who was about 15 miles away from him.

Now this is not a big deal as Gurps was just sending and receiving pictures. But imagine if he had been using Bump to send money via the Paypal application. The bug could have lead to something much worse than receiving pictures from randoms.

That’s something that should be brought to Bump’s developers attention.

Have you ever had such problem with Bump?