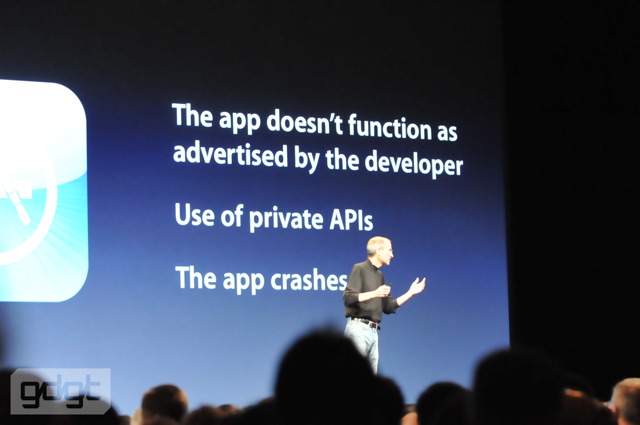 How many times have we heard of iPhone apps being rejected for no know reason? Yes, like about one thousand times.

Today at the WWDC, Steve Jobs revealed more information about the amount of apps submitted and the 3 reasons that sometimes get them rejected.

Every week, 15,000 apps are submitted for approval in the App Store. 95% of these are approved within 7 days. The 5% remaining is rejected for one of the following reasons.

The number one reason: it doesn’t function as advertised. It doesn’t do what the developer says it does, so we tell the developer to change the app or the description.

The second reason: the developer uses private APIs. If we upgrade the OS and the app breaks, we won’t have a happy customer.

And the third most frequent reason: they crash.

If you were in our shoes, you’d be rejecting apps for the exact same reasons. I just wanted to give you the facts — sometimes when you read some of these articles, you may think other stuff is going on.