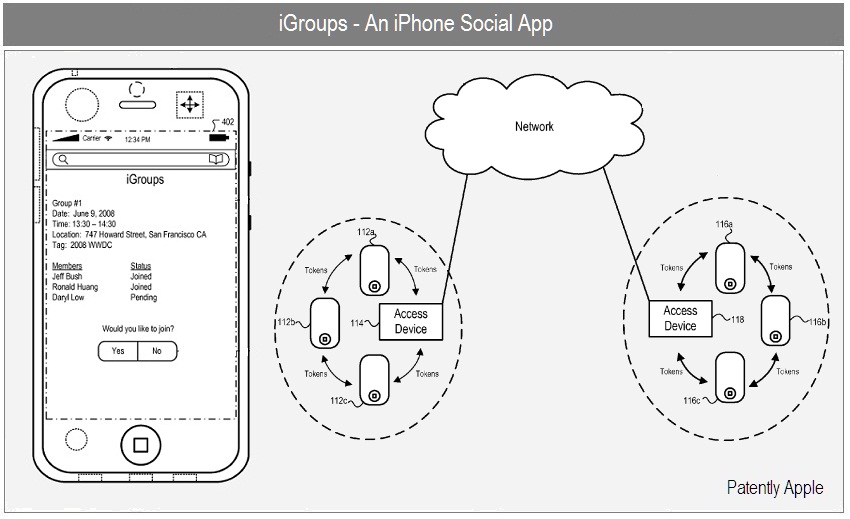 Enter iGroups. Not the application that’s currently available in the App Store but rather Apple’s iGroups. Whether the name is official or not, it’s Apple’s attempt at entering the SocNet world. iGroups attempts to socialize groups of friends or strangers, while attending events, so information can be shared as it happens.

Seems pretty simple and straight forward. Using Ad-hoc technology, a technology all modern celluar devices can become, users at the same event do not need to rely on wi-fi nor celluar service to communicate with one another. They do, however, need to be in close proximity of one another in order to broadcast anonymously and/or communicating.

Bluetooth has a weak encryption algorithm, so while in Ad-Hoc mode, is data protected? Is data encrypted? Can strangers eardrop? Apparently, data is protected. According to patent #20100070758 (originally filed in 2008) for which Apple has applied for, new encryption technology is at the front end of iGroups and not the SocNet application itself.

Cryptogaphic keys employed for sharing information are implemented to guarantee information shared remains encrypted and safe from prying eyes. Sounds good to me. I don’t mind encrypted data as long as the battery tax is kept below 0.01%.

Over the past 4 years, we have seen social networking sky rocket humanity into new forms of staying in touch and has given us the ability to share information almost instantaneously. There are several SocNet sites available to us at any given time, whether it be from our desktop or our mobile devices (hopefully iPhones). So why does Apple feel the need to enter the SocNet competition? It appears they have invented a new bluetooth encryption algorithm and they want us to use it.