When the iPhone initially launched in 2007, the much anticipated iPhone OS required an arsenal of jailbroken apps to perform even the mildest tasks such as MMS and video recording. But through product refreshes and several software updates, that list of apps is shrinking and the iPhone OS is now considered among the industries top mobile platforms.

Now that functions such as copy/paste and video recording are available in the stock OS, jailbroken applications like Clippy and Cycorder are no longer necessities. Now I know your thinking, “So what are you saying Cody, I no longer ‘need’ to jailbreak my iPhone?” Not even close.

As long as Apple continues to disable users from customizing their springboard backgrounds and their icons, and of course forcing them to remain with AT&T even though other carriers get far better coverage in their home area, and continue to ignore several other missing features, iPhone users will have a reason to jailbreak. One app I continue to jailbreak for, because you can only get it from Cydia, is SBSettings. 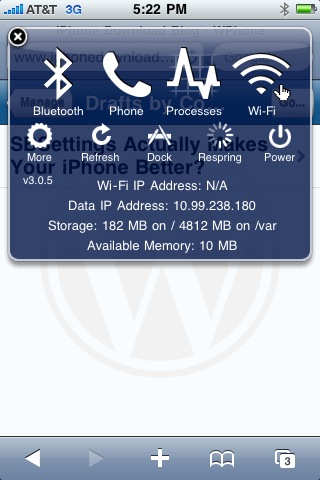 Now let me explain.  The feature I think Apple continues to miss the boat on is shortcuts. If I want to turn my bluetooth on, it is a 4 step process, 5 if you count the unlock screen. Same with changing the brightness, it’s a 4 or 5 step process. Other mobile platform developers have addressed the need for shortcuts to commonly used functions in the form of widgets or shortcuts in an always on screen task bar, but for some reason Apple resists.

Enter SBSettings By Big Boss. A simple, skinnable device manager that’s actually been around for quite a while. The application and themes for it can be searched for and downloaded from the Cydia App Store, so of course it’s available to jailbreakers only.

The first thing you’ll notice about SBSettings is how easily and quickly it launches once installed. Requiring nothing more than a finger slide across the top banner, the application drops down in the form of a window with several icons. Now the default theme is gaudy but I found it was easy to install downloaded themes by clicking the ‘more’ icon you see in the image below.

The theme I use is ‘iPhone Congruency’ and I love it because it looks stock, like it is supposed to be there. Once you got it looking good, again from the ‘more’ icon, you need to decide which ‘toggle’ icons are showing. If you don’t see a toggle you want, more can be downloaded through Cydia, and can be added in this same ‘toggle’ screen once downloaded.

I personally like the ‘processes’ toggle. Although the iPhone isn’t known for having great multitasking capabilities, the phone can still get bogged down with Mail, SMS, iPod, and Safari apps all open at once. The ‘processes’ toggle lets you shut these apps down and give your iPhone a quick boost in recovered RAM.

With toggles to turn bluetooth and wifi off and on with one touch, this app is definitely a time saver. It also gives you other great features like a quick launch App dock to launch apps from instead of scrolling through all of your icon-loaded spring boards, and the ability to re spring (or restart your iPhone, once again with one or 2 touches instead of 5 and 6 touches.

Between the time saving shortcuts, ease of use, and the fact that I can make it blend in with the rest of the phone’s GUI with a quick skin download, this free app from BIG BOSS available from Cydia is a must have in my opinion.

Hopefully Apple will stumble across this little gem at some point and really take the idea of ‘widgets’ and  ‘shortcuts’ more seriously. It would really be nice to see some sort of implementation of Apple’s popular dashboard widget screen get ported to their mobile devices. But for right now we must use the tools we have in front of us, and with apps floating around like SBSettings, maybe thats not such a bad thing. ;op