I have to say I’m a very patient man.  I tend to wait for products to come on sale rather than make a rash purchase.  That’s also how I approach the iPhone.  Instead of jailbreaking my iPhone 3G or buying workaround apps for functionality that will eventually be free, I am usually good at waiting.  But, my patience with Apple reached a breaking point and I decided to jailbreak.

The changes I made to my 16 GB iPhone 3G may seem small, but I now feel like I have a brand new phone! 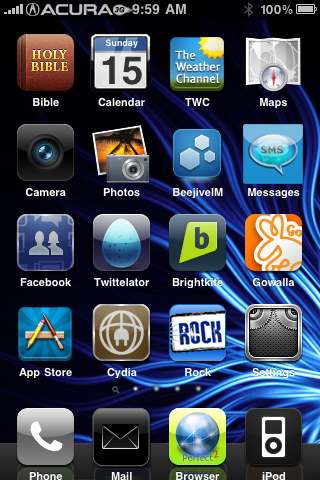 So, here are my reasons for jailbreaking:

Customization – I’ve been told that themes are Microsoft Windows-centric and Apple is not into themes.  Skins are not available for iTunes, unlike Winamp (remember that program?).  But, isn’t Apple supposed to be the “fun” computer company?  After 16 months of looking at the same basic home screen, I’m ready for a change.  Enter WinterBoard.  With a stock iPhone, you can only change the wallpaper on your lock screen.  With Winterboard, you can change your home screen background, add a percentage for your battery meter (for non-3GS users), as well as change the logos for your carrier, 3G and Wi-Fi icons.  The theme I chose is called Blue Thunder.  It also changed the stock icons of the apps that came with your iPhone and a number popular apps in the App Store.  I kind of understand Apple not wanting to give us the power of customization, lest our iPhones turn into obnoxious MySpace pages.  But, I’m tired of being a slave to Big Red.

Home Screen Managing – I’ve always thought folders on your iPhone home screen would be incredibly useful.  And, again, this thinking may have originated with my Windows upbringing.  But, wouldn’t you think it would advantageous to Apple to have the iPhone and iPod Touch be able to max out the number of apps possible by internal storage rather than home screen real estate?  I know you can install apps that will no longer show up on the home screen but that’s counterproductive.  With Categories, I trimmed down 10 pages of apps to 4 pages and everything is easy to get to.  Spotlight Search also works well with Categories.

Video Recording – I thought that since the iPhone 3GS gained video recording capabilities Apple would make video recording possible for the 3G.  Nope.  Instead, you have to choose between buying a new 3GS starting at $199 with a new 2-year contract or jailbreaking your iPhone.  Easy choice there.  So, I got Cycorder.  And I bet Apple was also behind the gimped version of Qik in the App Store which cannot do live streams.  Another reason to jailbreak.

I have at least another 7 months to wait for the next iPhone announcement.  I’m going to spend those months with my jailbroken iPhone 3G.  And I wouldn’t have done it if Apple was on its game.