Since the App Store was launched there have been many pinball games for the iPhone. I’m pleased that someone finally made a good one that’s not too complicated or confusing. IUGO presents Freeballin’. Freeballin’ [iTunes Link] is a pinball game for iPhone that keeps the classic feel of pinball by using touch controls only. It has three modes (as said in the app description) :

• Time Attack
Speed towards the targeted point value in a race against time.

The game also features 4 themes to play in (though I would call them worlds because each are rather diferent and are not small). I made a quick overview in Photoshop so you get an idea  of the themes (click to enlarge). But the levels go deeper back, it’s just hard to take screenshots with my new case: 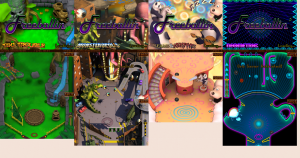 The themes are Tiki Trouble, Monsteropolis, Dreams & Nightmares, and Neometric. Each is quite different and entertaining.

The part of the game that is the most fun is that each theme / table has various missions to complete, making the game much more fun and giving it more of an objective. These missions also increase your score. Missions have you hit certain bumpers, go to or into certain areas, and interact with the theme.

Another thing that makes the game great is the quality of the content. Both the graphics and the audio of the game are well made and polished. I’m amazed, especially at the graphics. The game also features global score boards, giving players more of a motive to play and be constantly improving their scores.

As you can see I’ve been having quite some fun with the app 🙂 . I don’t really have a complain other than a few bugs lying around here and there. Luckily an update fixing those and optimizing performance has been submitted to Apple. So bye bye bugs. 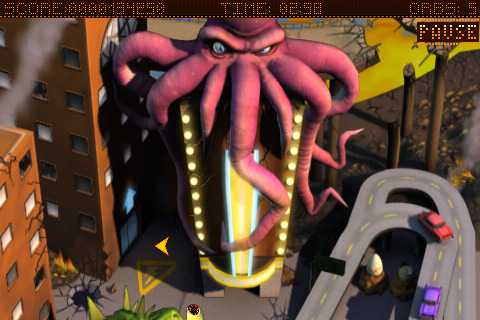 My experience with it has been rather nice. The polish on the audio and graphics keep you going, and all the missions (believe me there are quite a few) keep me entertained and away from getting bored. Plus I get to compete with people on the global score board.

Overall I highly recommend the app, especially since it is in a special introductory price of $1.99  (the price will go up soon!!!). I think anyone who has been looking for a good pinball game should take a look at this. And if the screenshots appeal to you take advantage! I believe this is the best pinball game available for the iPhone.

There’s a small problem for those who do not have their language on the iPhone set to English. I believe it does not display the text. The fix for this is also included in the update that has been submitted to Apple for review.