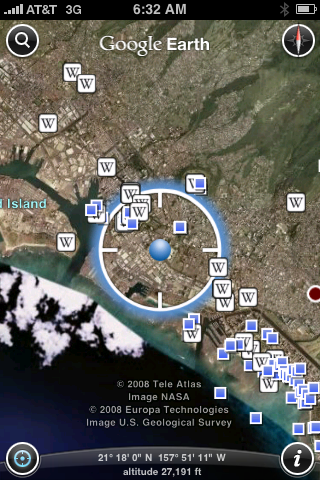 So, when the T-Mobile G1 was released a week ago and the new Android platform was introduced to the world, did you think that Google would stop supporting the iPhone?  Well, it seems the answer is a resounding, “No!”  Google keeps its relationship strong with Apple and its iPhone users with a new app this week.

In addition to Google Maps, which already comes with the iPhone, you can download Google Earth [iTunes link] from the App Store for free.  When I first opened up the app, I immediately drew a comparison with the Earthscape [iTunes link] app which is also free.  Both apps use a 3-D rendered landscape.  Google Earth for the iPhone includes Wikipedia entries and photos from Panoramio.  You can set it to see your longitude and latitude as well as the altitude at which you are virtually viewing the globe.

Unlike the desktop version of Google Earth, the iPhone app has no street overlay.  Boo.  So, basically it is a big 3-D globe with Wikipedia entries and Panoramio photos.  Boo.  I’m disappointed to say the least.  Especially so since Earthscape has gotten quite good over many updates and has built up a photo community.  Right now, you cannot take pictures within the Google Earth application. 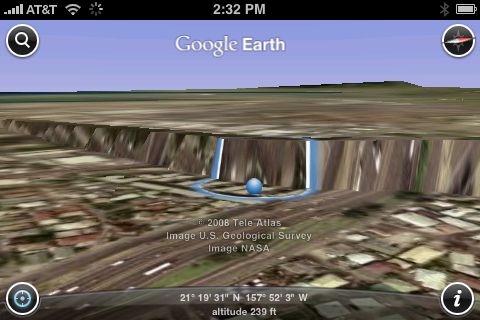 Google Earth also has some bugs.  Near my house, there is a weird 3-D wall along my street which doesn’t exist in real life (see picture, right).  Looks like a bad render to me.  Unfortunately, it doesn’t go away.  Boo.

Google Earth does have some interesting features that even Earthscape doesn’t have.  To see Google Earth in 3-D, you tilt your iPhone.  It has a Google Street View effect, although you can only tilt up and down.  Also, clicking the compass in the upper right corner makes the top of your screen north.

Hopefully, most of my complaints will be addressed in future updates.  In the meantime, go ahead and download BOTH Google Earth and Earthscape and let us know which app you like better.