iOS 14 brought with it what could only be described as the biggest upgrade to the iPhone’s Home Screen to date. The integration of native widgets alongside app icons means that the Home Screen is no longer limited to a bland grid of icons.

But despite this change, many would argue that the Home Screen still looks and feels the same — especially if you still use the Today page as a dedicated home for all your widgets.

That’s one reason why I’m excited about Starfish, a jailbreak tweak originally designed and created by iOS developer Ayden Panhuyzen. This tweak reimagines the Home Screen with a slicker interface, fancier animations, and a cleaner aesthetic.

Starfish has been in beta for quite some time now, but Panhuyzen was recently hired by Apple to work on software. Dynastic is now listed as the developer of the tweak in the Dynastic Repo, but we still aren’t entirely certain how that will impact the development timeline of the tweak. One thing we can tell is that Starfish was recently updated to a new beta build, so it’s being actively maintained for sure.

Regardless, I’ve been testing the beta for a little while now and can report that it looks and feels amazing. The first page of the Home Screen incorporates a user’s favorite apps alongside a stunning date and time display and a glance at the weather conditions outside.

Outside of the obvious UI changes, users will also find themselves pleasantly suspended by the sexy animations that accompany the new Home Screen interface offered by Starfish. The animations are not only appealing, but they’re so smooth that you’d think Apple these moves created them. It’s no wonder that Panhuyzen works for Apple now — the company is known for snatching talent from the jailbreak community.

Once installed, Starfish lets the user set up a separate Home Screen, which is highly recommended since it preserves your original Home Screen in case you ever want to go back. Since Starfish makes substantial changes to the Home Screen, it would be inadvisable to ignore this feature.

The tweak also adds a dedicated preference pane to the Settings app where users can configure the tweak to their liking: 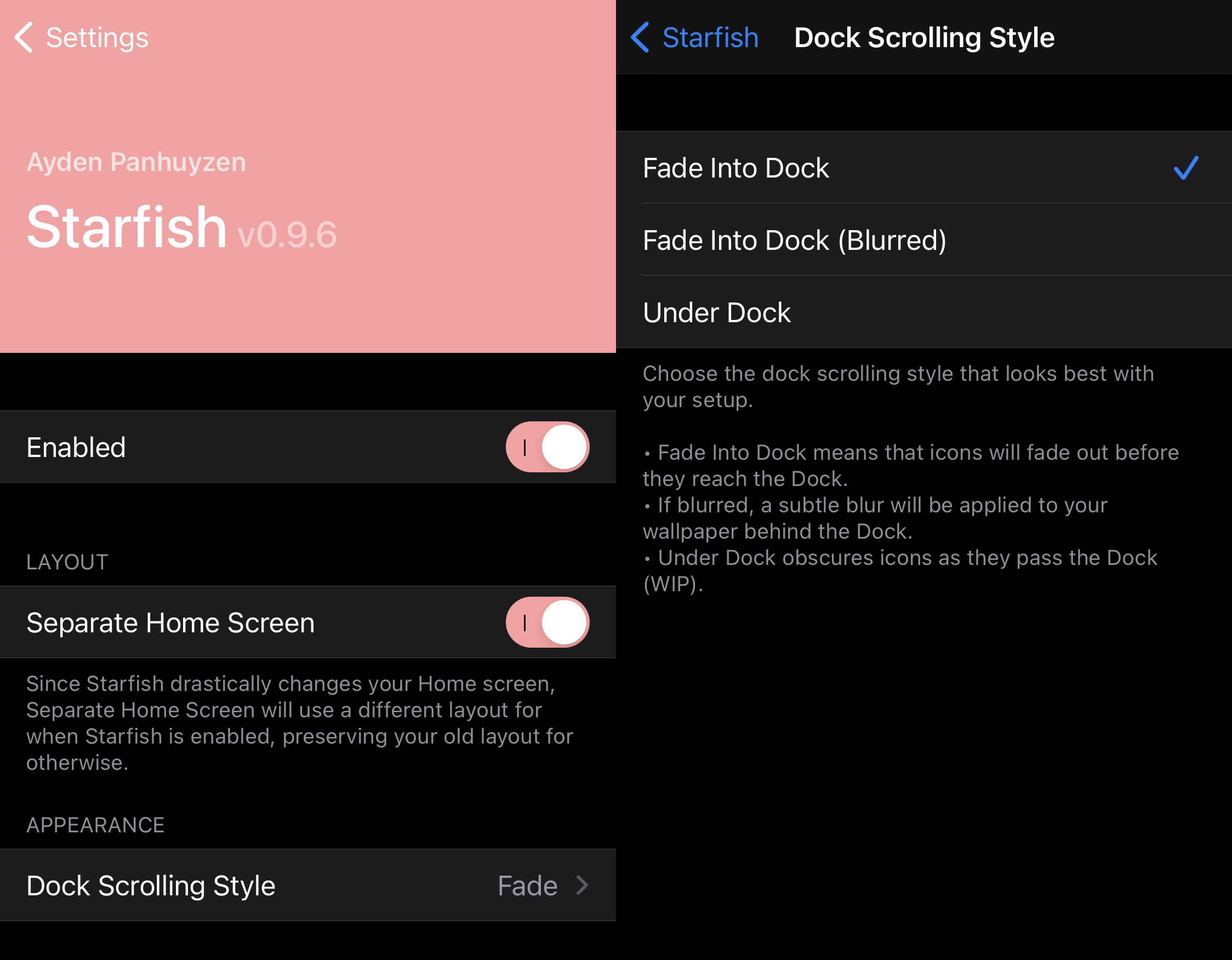 While I’ve always been wary of beta tweaks, Starfish doesn’t feel like a beta. It’s smooth, responsive, and aesthetically pleasing. Those who are interested in giving Starfish a try can purchase it from the Dynastic Repo repository for $2.49 — a $1 discount from the full price expected when The tweak comes out of beta.

Do you plan to augment your handset’s Home Screen with the Starfish experience? Let us know in the comments section down below.