A lot of manufacturers like to claim they make “thin” iPhone battery cases, but it’s really just a marketing gimmick. I’ve tried dozens of iPhone cases with built-in battery packs over the years, and despite having words like “ultra-slim” and “air” in their branding, most of them were still far too bulky to carry on a daily basis.

Enter the ThinCharge case by ChargeTech. The company sells the case as the “thinnest iPhone 6/6s battery case on the market,” and I have to say they might be right. I’ve been using the case on and off for the past several weeks, and I can confidently say that this is—by far—the thinnest iPhone battery case I’ve ever tried.

How thin are we talking? Well the case itself measures just 11mm thick. So if you consider that the iPhone 6s is 7.1mm thick, then the ThinCharge is only adding around 3.9mm of thickness, which is super impressive. Additionally, there’s no ugly chin to be found down around the Lightning port, like on most other cases.

Having said all of this, the ThinCharge is no where near perfect. I ran into multiple issues during my testing, including slow charging rates for both the case and my iPhone, as well as a finicky cover over the charging port and other annoyances. So is the thinness of the case worth these caveats? Read on for my full review.

The ThingCharge iPhone case actually started out as an Indiegogo project, and it ended up being one of the highest funded cases of all time on the site. It works with both the iPhone 6 and 6s, and supports all versions of iOS. The battery pack is of the 2600mAh Li-Polymer variety, which translates to roughly an extra 10 hours of talk time or 7 hours of web browsing time, and the case charges via Apple’s own Lightning cable. That’s a pretty big deal, as it means you don’t have to lug around an extra cable, and it also means data transfer support, so you can connect to iTunes without having to remove the case.

It’s really hard to convey just how thin this case is with words, and I don’t even think the photos do it justice. It looks impossibly thin in person, and it’s not until you pick it up and feel the weight in your hand that you’d be able to tell it had a battery in it. The unassuming design really helps with this illusion. Save for the (rather unsightly) ThinCharge logo on the back, the case I was sent looks like your average, generic black iPhone cover. 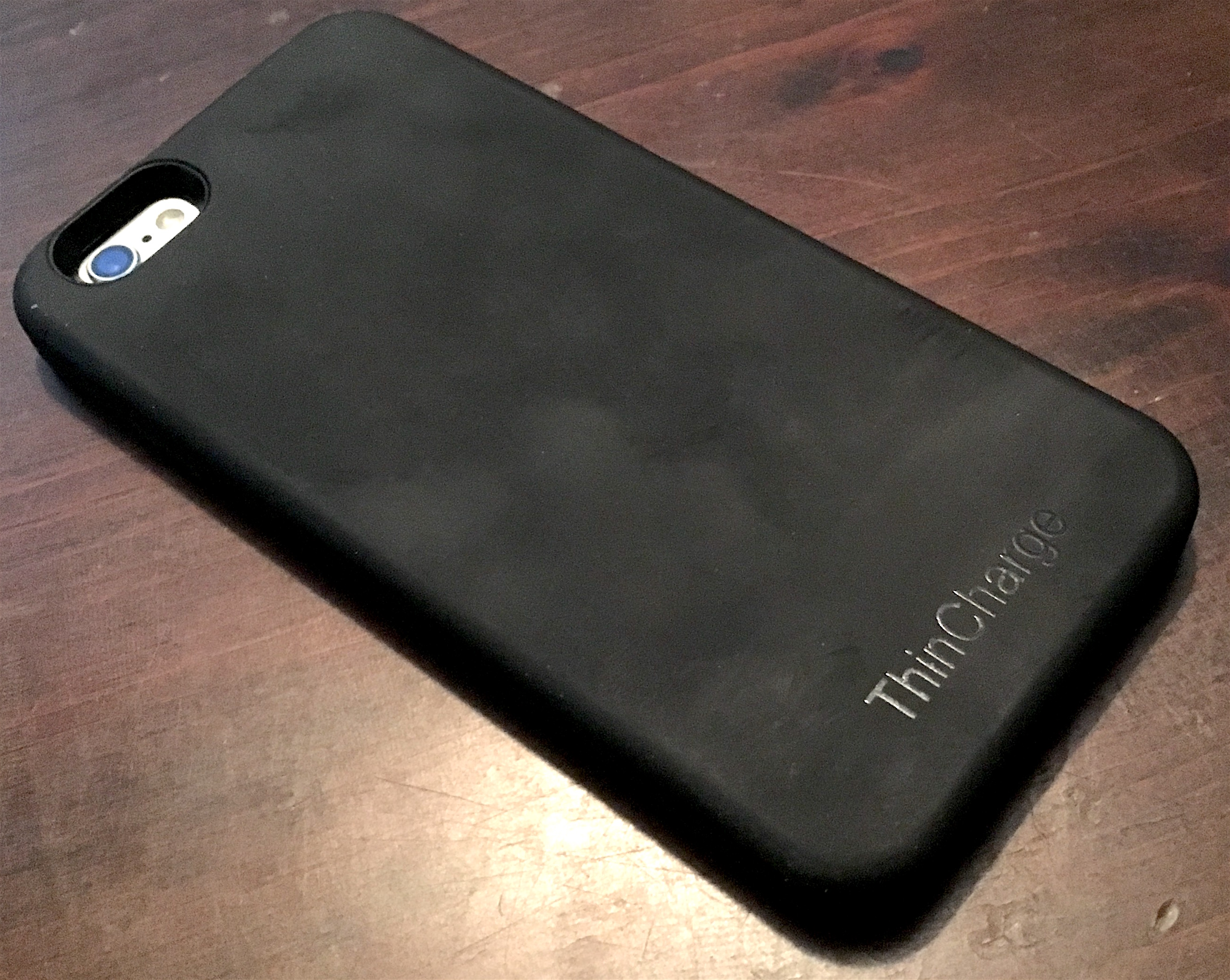 The case breaks up into two pieces. The top maybe 5% of it detaches, so you can slide your iPhone in, and then locks securely back into place—I have to say this is one of the better designs I’ve encountered in terms of how easy it is to put this case on and remove it. The top piece is made of a very thin plastic, so I can’t say how it’ll hold up over a long period of time, but I haven’t had any issues with it yet. The piece also has a cutout for the Lightning charging port, which charges the case, that has a tiny, attached plastic cover over it—more on this later. By the way, it’s very convenient that the charging port of the case is located at the top. This makes for a much more comfortable experience when using the phone, in the case, while it’s plugged in.

Moving down the case we have a cutout for the iSight camera on the back, a Power/Sleep/Wake button cover on the right, and a cutout for the Mute switch on the left. Just below that we have two covers for the Volume up and down buttons, and the ChargeTech folks have cleverly hidden the case’s power functionality here. Hold down the Volume Up button to turn on the case, and again to turn it off. You can also check the power level of the case by holding down the Volume Up button for an extended period of time, forcing a green LED indicator to flash accordingly. 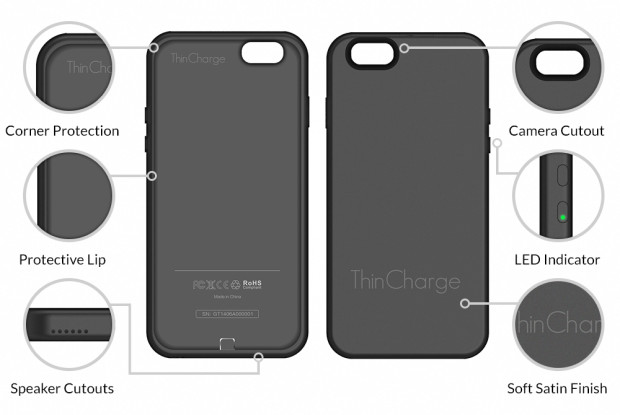 Finally, at the bottom of the case you have the Lightning plug, as well as openings for the speaker, microphone and of course the headphone jack. It’s worth noting again that there is no ugly chin here; something you see on the majority of other battery cases. The ThinCharge is as narrow on the bottom as it is on the top. With all of this in mind, it’s easy to say that this is, design-wise, the best battery iPhone case I’ve ever tested.

Functionality, however, is a different story. Everything about the case seemed great initially, but as the days went on I started to notice problems. The two biggest issues are the charging rate for my iPhone and capacity consistency for the case. Let’s talk about the former first.

Now, I didn’t perform any scientific tests. But I did note on multiple occasions that after an hour with the ThinCharge case on my iPhone, my battery level had only increased around 15-20%. You don’t need a degree from MIT to know that this is not even close to normal (otherwise it’d take several hours to recharge your phone). It wasn’t quite this bad every time, but it also didn’t get much better either. It’s worth noting, too, that the case itself is also fairly sluggish to charge.

As for the second issue, when I say the case has poor capacity consistency, I mean that it never really seemed like the ThinCharge was working with the same battery level throughout my testing. Sometimes the [fully-charged] case would add 90% battery level to my iPhone 6s, and others it could only push my completely dead handset up to the mid-70’s. Again this was very sporadic, so it was hard to keep track of, but it was definitely noticeable enough to point out.

Note: to be fair, I notified my ChargeTech rep about these two issues and they offered to send me a replacement. I may post a follow up if the new case performs more admirably.

Another beef I have with the case is the power function built into the volume buttons. As I said above, the concept itself is pretty clever, as it voids the need for additional physical buttons. But I’ve found that it’s just not that great in day-to-day usage. The volume-up-to-turn-the-case-on function is pretty inconsistent, as in sometimes it takes several presses to activate, and it’s fairly tough to get a read on how much juice is left in the battery. I think it’s 1 blink for over half, and 3 blinks for—honestly it doesn’t matter. The point is, I’d take an old-fashioned, standalone power button and 4 LED status lights over this setup any day. 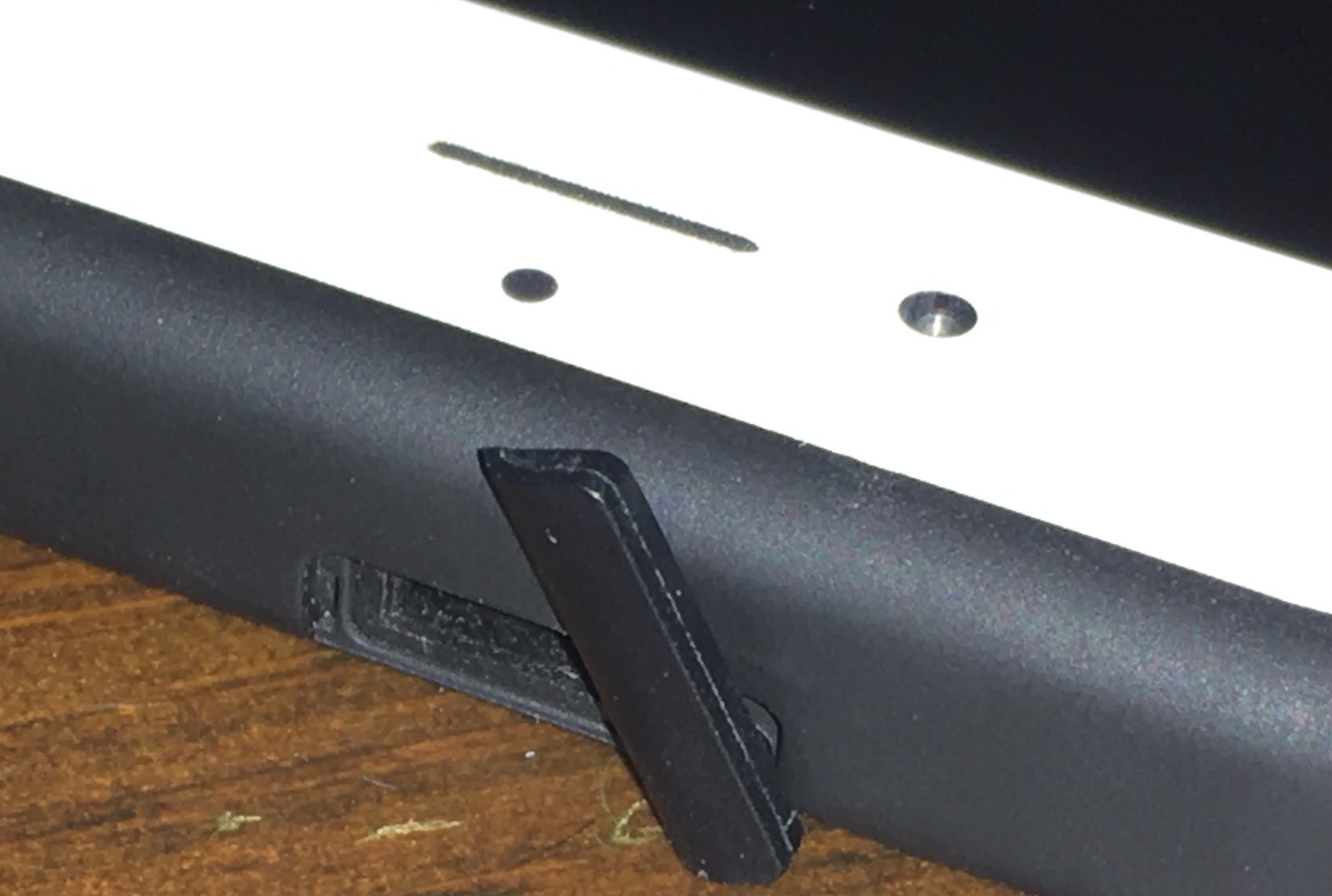 Finally, there’s the cover over the top Lightning port. I really dislike this tiny plastic cover, to the point where I considered breaking it off. It’d get stuck so bad sometimes that I’d have to use a pocket knife to pry it open, and it’s really just not worth the hassle. You can kind of get the idea of what I’m talking about in the photo above. Imagine having to push this tiny plastic piece down into place, and remove it, with nothing really to grab on to, at least once a day.

So what’s the bottom line? Well if you’re in the market for a battery case and you want something that’s not going to be bulgy or overly expensive, you should give the ThinCharge a shot. At $130, there’s no way I could recommend it because of the issues I outlined above. But for $60, you get an extremely thin battery case that has a very nondescript design, is easy to put on and take off, and charges via Apple’s Lightning cable. And if for some reason you get a malfunctioning unit like I did, it seems like ChargeTech will be quick to make it right. Each case is covered with a 12 month warranty.

For those interested, you can buy the ThinCharge on Amazon for $60. It’s Prime eligible, and comes in black, white and gold colorways. Unfortunately, though, it doesn’t come in Plus size.