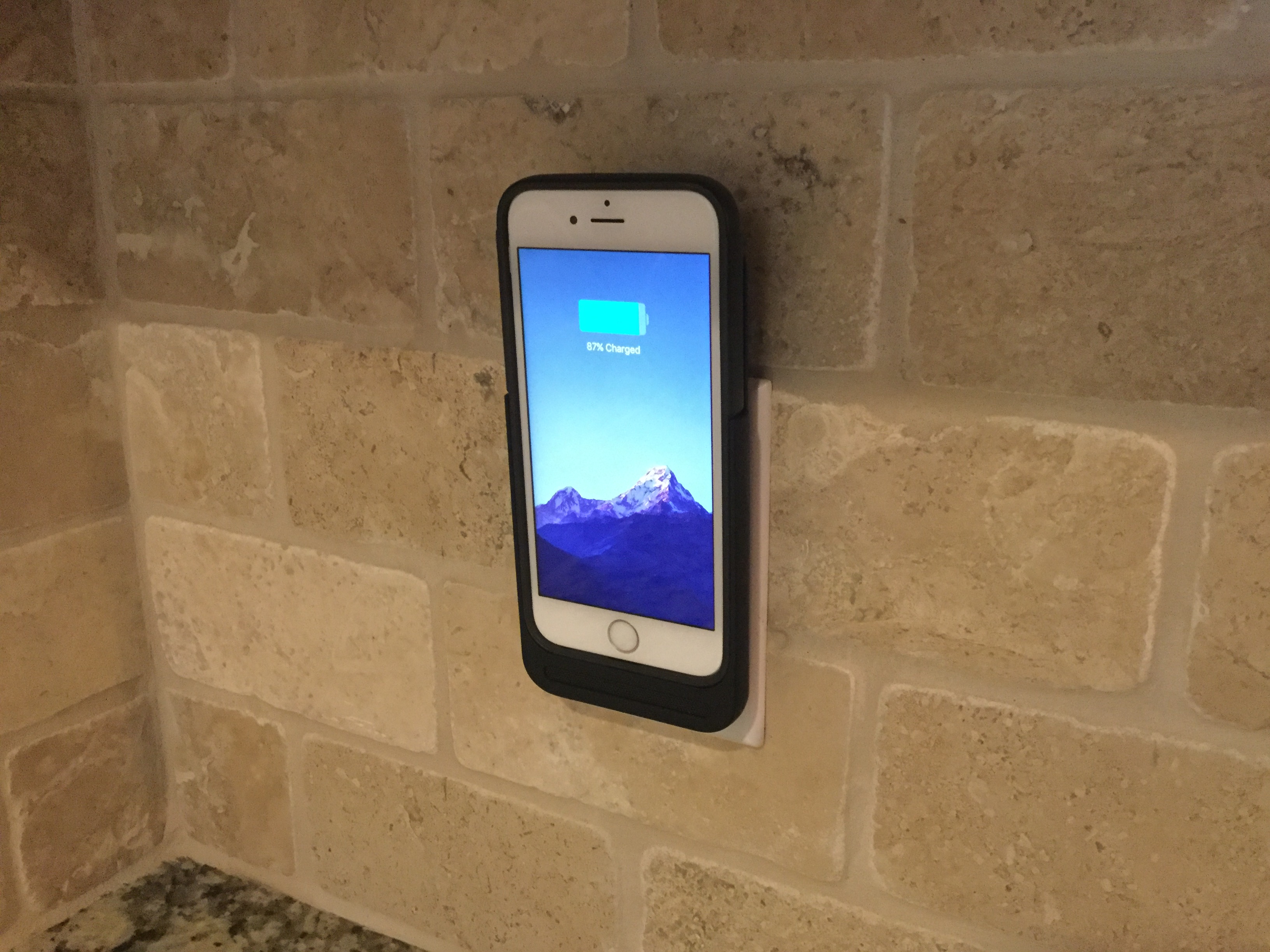 After spending a year growing accustomed to the iPhone 6 Plus, I decided to go for the smaller handset. I’ve been pretty happy with the 6s thus far, but the smaller size means a smaller battery, and I’ve found it’s not enough to get me through a normal day.

When I’m working, my dock is typically within arms-length, but on days when I’m out and about this gets to be a problem. We have several battery packs, but I find USB cables very limiting, and I definitely don’t want to use a bulky battery case full-time.

That’s where the Prong PWR Case comes in.

What is the PWR Case? Well it’s a battery case, similar to a Mophie Juice Pack, but with a bit of a twist. The PWR features a unique 2-piece design: there’s the actual battery case, which has two integrated charging prongs for quick, cordless charging, and the companion silicon case, which keeps your iPhone protected throughout the day, and gives you a nice, secure fit into the battery case. 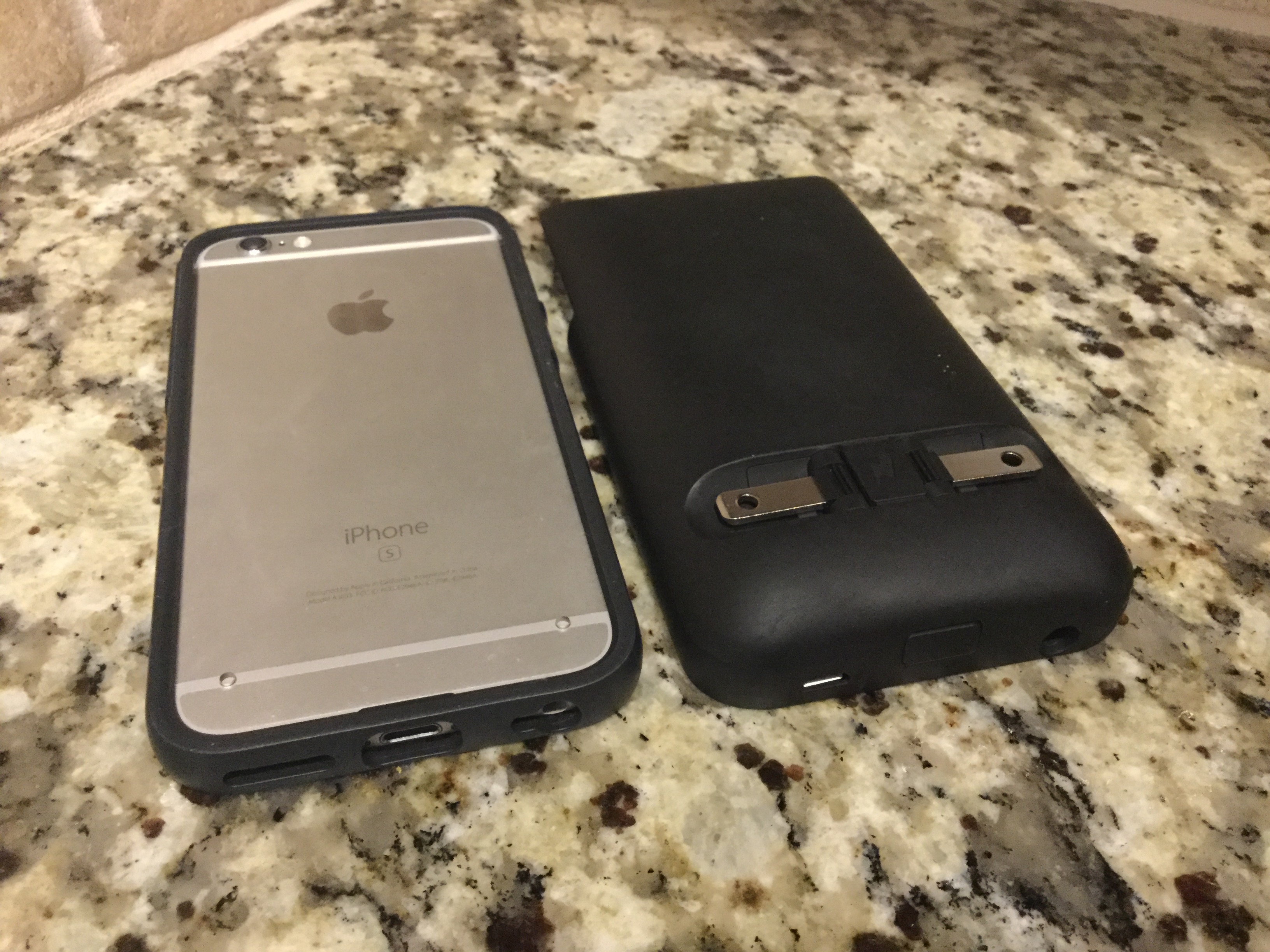 The battery inside the case is of the 2600 mAh Lithium Polymer variety, which Prong says will fully recharge your iPhone 6 or 6s (from 0%) and then some. The charging prongs are rated at 100-240 volts, so they’re compatible with most power outlets here in the US, and the output is 5V 1.0A, meaning the PWR can charge your phone quickly. In my testing, the case would take my iPhone 6s from roughly 10% battery to 100% in just over an hour. Unfortunately, the case itself is slower to charge, and typically takes me more than two hours to refill.

What’s in the box: the battery case, the silicon case, an extension cord for the headphone jack, and a micro USB cable, in the event you need to charge the PWR and can’t plug directly into a wall outlet.

Now that you know a little more about the PWR Case, let’s get on with the review!

The battery case has a nice, premium feel to it, and is very well-designed. It’s solid black, with no large, ridiculous branding on the back, and the prongs sit flush with the case when you don’t need them and easily flip out when you do. This makes recharging the case a breeze, and makes for one less cable and power adapter you have to worry about.

The companion silicon case was equally well thought out. It’s thin and very unassuming, with a black bumper and see-through plastic back. It also has large, easy-to-press button covers (which are actually pretty hard to find) and a nice big opening around the iSight camera so there’s no blockage. It seems like it would protect my iPhone in the event of a minor drop, and I have to mention again how nice it is that there is no overly-large, obnoxious branding here.

So to paint you a picture, what happens is when 8 or 9 p.m. rolls around and my iPhone is about to die, I unplug the battery case from the wall outlet above my kitchen counter and slide my phone in. Again the prongs easily fold into the back of the case, and I continue to use my phone like normal while it recharges. Then when my phone is fully recharged, or has more than enough to get me through the rest of the day, I pop it out and plug the case back into the wall. The whole thing just feels very seamless.

I actually don’t have any major complaints about the PWR Case, but I also don’t mind nitpicking, either. We’ll start with the silicon case this time. Despite my fondness for it, there has been times where I felt it’d be nice not to have to have the case on my phone to use the battery pack. It’s thin, but not nearly as thin as my phone by itself, and it sometimes sags around the corners and charging port. This being said, you can plug a naked iPhone into the battery case, it just won’t be very secure.

As for the battery case, I have to say that it sometimes muffles audio. There’s no opening on the bottom for the speaker, so the case tries to redirect sound to the front through what looks like a speaker grill. The result isn’t necessarily softer sound, but to me it comes out noticeably more tinny. Again, these aren’t major flaws so much as they are minor annoyances.

The bottom line here is if the battery on your iPhone 6 or 6s isn’t making it through the day, and like me you find typical battery packs with USB cables too restricting, and standalone battery cases too bulky and difficult to put on/take off, the PWR Case is for you. It’s well-made, and offers some unique features that help remove some of the hassles related to iPhone charging.