The US Department of Justice is installing equipment on airplanes that masquerades as a cell phone tower in order to gather mobile phone data, according to a new report from The Wall Street Journal. The program’s goal is to identify criminals, but each plane is capable of collecting data from thousands of phones in a single flight.

The Journal says these spy devices are called “dirtboxes,” and have a surface area of two feet by two feet. They’re being installed on fixed-wing aircraft by the US Marshals Service’s Technical Operations group, and purport to be strong-signaled cell towers. This tricks cellphones into giving them their IMSI info, making them totally trackable.

Once a suspect’s cellphone has been identified, a dirtbox can pinpoint its location within an impressive 10 feet—all the way down to a specific room in a building. Newer versions of the technology can reportedly do a lot more than GPS tracking, such as jam cellular signals and retrieve data from a targeted phone including texts and photos. 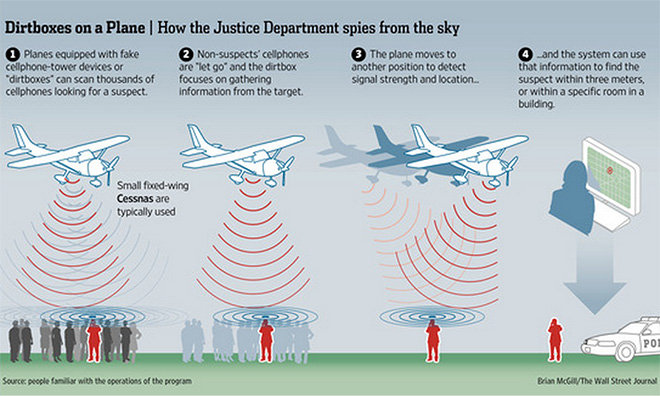 And because it uses IMSI (International Mobile Subscriber Identity) numbers—the most basic form of identification shared by all cellular networks—encryption does nothing to prevent the process. It completely bypasses the phone’s software, and even carriers. A spokesperson for Verizon was quick to note that it was not aware of the project.

Unsurprisingly, the Journal says some folks inside the Marshals Service have questioned the legality of the spy program and its internal safeguards. While dirtboxes are programmed to discard data collected from non-suspect devices, they don’t do so immediately, meaning at some point they’re carrying private information on thousands of users.

When questioned, the Department of Justice said that “what is done on U.S. soil is completely legal,” although it’s not clear how closely it monitors the program. It’s believed that the US Marshals are operating Cessna aircraft from at least five metropolitan-area airports, with a flying range covering the majority of the United States population.