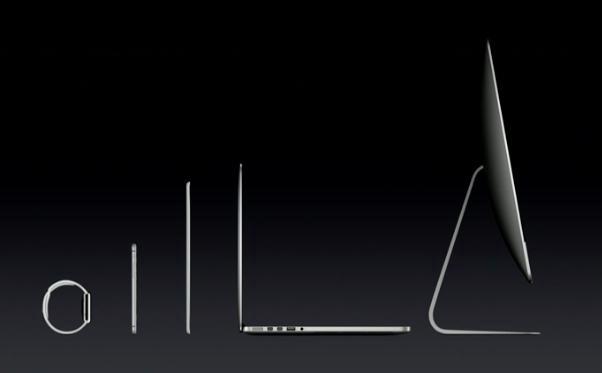 The Mac Pro’s days of being Apple’s biggest and baddest Mac may be numbered, even with that redesign that everyone either loves or hates. Whether it looks like a trash can or not, the Mac Pro has always been the most desirable Mac on the market.

When Apple showed the new iMac with Retina 5K display to the world everything changed. Not only does the new iMac boast that gorgeous 5K screen, but while that would once be its only claim to fame, the new iMac is more than a one trick pony. The new iMac has plenty of bite to go with its bark.

Speaking of the event, did anyone notice the graphic Apple flashed a couple of times that showed its product line up from the Apple Watch up to the new iMac? Did you notice what was conspicuous by its absence? If the Apple Watch is the beginning of Apple’s new product lineup, you would expect the Mac Pro to be at the other end. But it wasn’t.

The matter of whether the new iMac will eat the Mac Pro’s lunch is something that’s been on my mind for a couple of days, and I’m not the only one who’s been pondering Apple’s new world order – the infamous Marco Arment, himself a Mac Pro owner, has also been discussing the state of play at the top end of Apple’s lineup. In fact, he says he’s even considering moving his fancy Mac Pro on in favor of picking up one of the newer 5K monsters. If it’s good enough for Marco, then it’s good enough for most people.

The crux of the issue is that screen. Users of Mac Pros aren’t exactly flush with choice when it comes to finding a nice, big 4K monitor to go with their Mac. Apple’s launch of the 5K iMac means that its all-in-one is now the proud owner of the highest resolution screen Apple has ever made, and it looks like it’s going to stay that way because as disappointing as it is for Mac Pro owners, there’s no 5K Cinema Display. In fact, there’s no 4K one either. If you want a mental resolution and an Apple badge, then it’s the 5K iMac or nothing.

But buying the iMac instead of the Mac Pro is no longer a case of compromising. As Arment points out, thanks to the new iMac’s speed-bumpted CPUs it packs enough of a punch to even out-perform the epic Mac Pro depending on what you’re using it for. Add that to the benefit of having more pixels than most people will know what to do with, and the iMac starts to become a compelling option.

And then you look at the price.

Let’s take the configurations Arment was speaking about – a reasonable comparison of two similar performing machines. In the red corner, we have the Retina iMac with a 4GHz CPU, 16GB of RAM and half a terabyte of SSD storage. The blue corner has the Mac Pro with its 6-core chip and the same RAM and storage options. Graphics are for the iMac and Mac Pro come in the shape of the M295X and D500 options respectively.

Plus a monitor that’s not going to be as good as the screen on the iMac.

If you don’t need loads of cores then the decision is an easy one as far as I can see, and even if you want the extra power it’s not a black and white situation. I know which I’ll be choosing, and it’s the size of a small window.

But before then, I need to sell one of my children to pay for it. Maybe both.