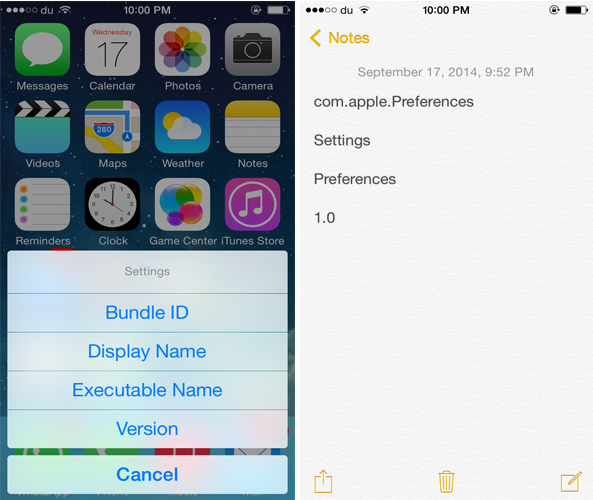 If you ever wanted to quickly find out additional information about an app such as its version or bundle ID, you should probably check out a brand new jailbreak tweak known as Flinfo.

The tweak allows you to find out an app’s bundle ID, display name, executable name or even its current version by swiping up its app icon. After doing so, an action menu pops-up that allows you to select the information you want to view. Once you’ve chosen the information you want to display, it will be copied to your clipboard and you can view it by pasting it in the Notes app or anywhere else.

Once you install Flinfo, there are no configurations to make. The tweak will be enabled by default and you can start viewing additional details about an app by swiping up its icon. You can also change its activation method from Activator. For instance, you can choose to flick left, right or down to invoke the tweak rather than swiping up.

Instead of copy and paste functionality, the developer could create the tweak in such a way that the selected information would be displayed right away when you choose it. Not only is it quicker, but more convenient than copy and paste.

Personally, I don’t see how this would be useful to a normal user other than finding the current version of an application, but it might come in handy to developers. Yet, if you want to give Flinfo a try, you can download it for free from Cydia’s BigBoss repository.