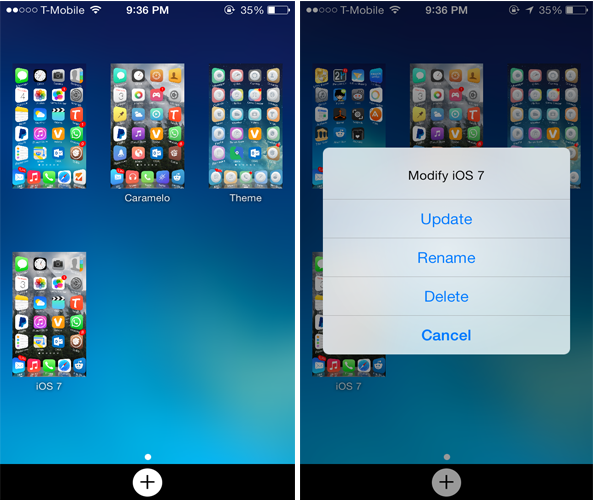 When you try new themes, you might be tempted to change the Home screen setup in order to bring a better look to your device. Even when you install new jailbreak tweaks, you’ll definitely have to disable the conflicting ones and this might ruin your current setup. SetBack is a new jailbreak tweak that overcomes this annoyance.

Developed by GroovyCarrot, SetBack allows you to easily switch between different saved jailbreak setups. The tweak allows you to save the current state of your setup for future use. This said, it stores all the installed tweak settings, applied Winterboard themes, icon layouts on your Home screen as well as wallpapers. With the touch of a button, you can quickly revert back to a saved setup.

Installing SetBack will add a new standalone app to your Home screen. The first time you open it, you’ll view an empty space with just one preview card that shows your Home screen and tapping on it will close the app. But, this is the place where you can access all your saved setups.

You can save as many setups as you want without any limits. To switch to a different setup, simply tap on one of them and it will start to revert back to a specific saved setup followed by a respring for the changes to take place. After your device boots up, you’ll notice it looks exactly just as you saved it. Note that the tweak doesn’t uninstall any tweaks or themes. It just restores their settings. Long holding on a preview card allows you to either update the setup with your current Springboard setup, rename or delete it.

I’d definitely recommend you to give this tweak a try if you don’t want to ruin your current setup when switching to a different jailbreak tweak or theme.

You can grab SetBack from Cydia’s ModMyi repo for just $1 and it is compatible with iOS 7 iPhone and iPad.