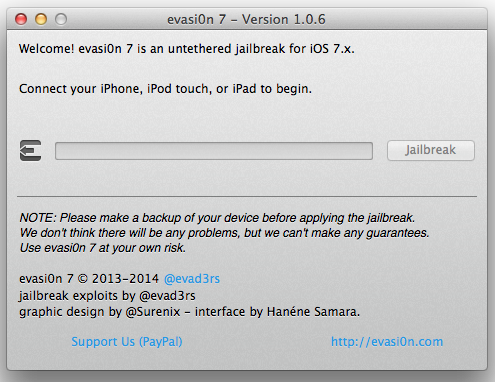 Following Apple’s release yesterday of iOS 7.0.6, the evad3rs have released an update to their evasi0n7 jailbreak tool. The update, which brings the tool to version 1.0.6. included a fix for an SSL connection verification issue, which turned out to be a major security flaw in the operating system.

For this reason, we recommend that, if possible, you update to the latest firmware and then use evasi0n7 1.0.6 to jailbreak your device…

I just can’t believe this bug happened! For god sake, they don’t have regression tests for TLS? :/

As always, this version of evasi0n7 is compatible with any device capable of running iOS 7. You can download evasi0n7 1.0.6 from our Downloads page, and for those of you who aren’t sure how to use the tool, we have a Mac tutorial and Windows guide to walk you through the entire process.