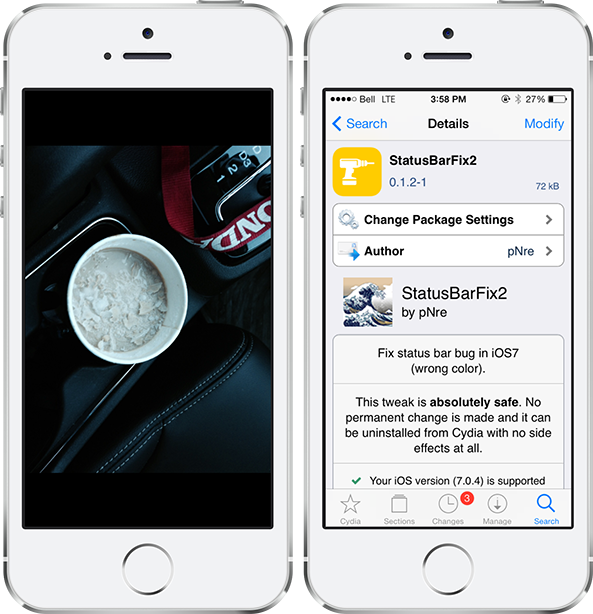 Jailbreaking an iPhone, iPad or iPod touch provides many benefits that otherwise aren’t possible on a stock device, although there are occasionally a few bugs that may be encountered along the way. One prominent issue that users have been facing with the iOS 7 jailbreak is the status bar turning black and not disappearing in stock apps like Calculator, Camera, Photos and Weather. This was an annoying nuisance that I was facing on my own iPhone up until this morning, when I discovered StatusBarFix2…

The status bar bug is caused by Cydia moving the location of stock apps, and StatusBarFix2 resolves that issue. The jailbreak tweak is said to be “absolutely safe,” since it makes no permanent changes to the iOS filesystem — it is a Substrate-based extension — and can be uninstalled from Cydia with no side effects. In the event that your status bug refuses to fix itself, a few additional troubleshooting steps have been outlined by the tweak’s developer pNre.

StatusBarFix2, touting an impressive 25,000 download count, supports all devices running up to iOS 7.1 beta 3. The tweak is not available on a default repository, so you will have to add repo.pnre.co.vu to your Cydia sources by tapping Manage > Sources > Edit > Add. Afterwards, the package should appear as a free download. Source code is available on GitHub.

On a side note, for those wondering about the screenshot above, my coffee froze in my car overnight as temperatures dipped down to –20°C (–5°F) in southern Canada. Spring temperatures couldn’t get here any quicker.

Does this tweak fix your status bar?

Thanks Giannis for the tip!