Last month, Apple upset tens of thousands of Breaking Bad fans when it posted on iTunes that those who had already purchased what they thought to be the entire final season of the popular series would have to pay again for the final 8 episodes.

It was the TV network’s fault— it was AMC’s decision to split the fifth (final) season into two parts. But iTunes user Noam Lazebnik, of Ohio, feels that Apple deserves some of the blame too, and he’s filed a class-action lawsuit against the company…

9to5Mac points to the filing:

Defendant Apple, Inc. (“Apple”) apparently disagrees. This case is about Apple’s deceptive and unfair sales practices with regard to Season 5 of the popular television program “Break Bad,” which produced by AMC Networks, Inc., marketed by AMC and Apple and sold through Apple’s iTunes platform.”

To recap what happened, users have been purchasing the first half (8 episodes) of the final season of Breaking Bad, under the impression that the second half would be included too. But the final 8 episodes showed up in iTunes as a separate purchase. 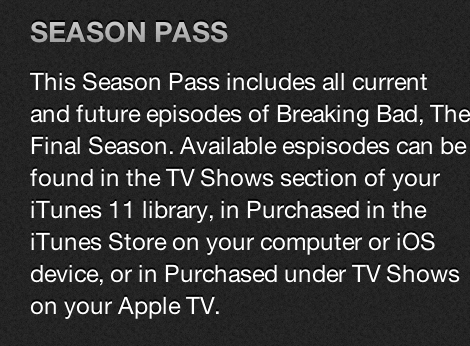 To be fair, AMC has been rather confusing in marketing the fifth season of the hit show. In a May 2012 press release, they specifically said that the final season would include 16 episodes, but they have since run several ads referring to a split release.

Still, I’m not sure the extra $20 was worth filing a lawsuit against Apple over—especially considering that all told, the $40 users spent on both halves of Breaking Bad Season 5 is about what you’d be spending on a TV season of a newer, hit show anyway.

Regardless, Lazebnik and his attorney are going after Apple for engaging in false advertising and unfair business practices, and are seeking damages of around $20 per class member—which would include the millions of users who bought BB Season 5.

What do you think, should Apple be held responsible here?