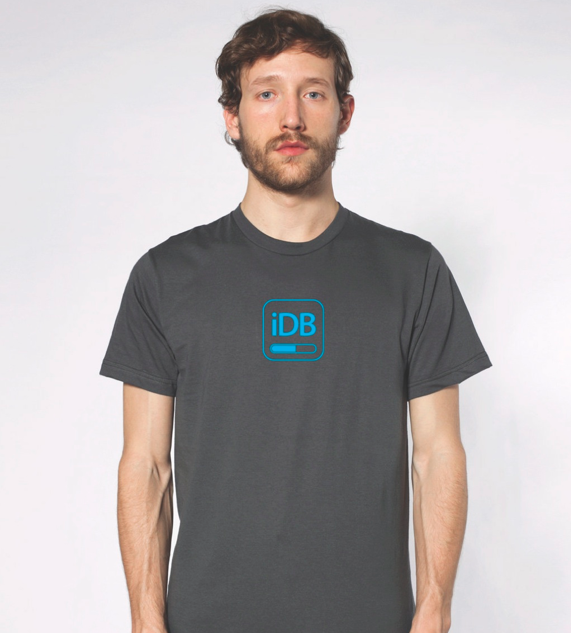 If you listen to our weekly podcast Let’s Talk Jailbreak, you might have heard that I’ve had a bunch of iDB t-shirts made a while back, yet I never tried to sell them or even give them away. To be honest, although the box has been sitting in my office for a couple months, it kinda became part of the office to the point that I forgot about it.

But it’s this time of the year where I must make some room for more and I need to unload these t-shirts. While selling them did cross my mind, I decided to actually give them away to a few loyal readers…

The iDB t-shirt uses the American Apparel 2001 asphalt as a blank, with the iDB app icon screenprinted on the front, and the full iDownloadBlog.com logo on the back. I specifically chose this t-shirt blank because of its good quality and nice fit. In short, this isn’t some cheap t-shirt from CaféPress.

Only a very small amount of those iDB t-shirts were printed. Although they’re not numbered, if you get one of those, you know you’ll be part of a very small group!

How to get your hands on an iDB t-shirt?

In order to keep this giveaway exclusively for iDB readers, there won’t be any sort of promotion needed. So no, you won’t have to “like” on Facebook, or retweet this post in order to enter. All we ask is that you take the time to write a comment and tell us why you deserve an iDB t-shirt, and what size you want (we only have M or L available).

Example: I want an iDB t-shirt so I can wear it when I’ll be waiting in line for the iPhone 5S. My size is L.

Unfortunately, for logistic reasons, this giveaway is only available for people inside the US.

The winners will be contacted next Wednesday via the service they used to login and comment. Good luck to everyone!

The winners of the iDB t-shirt giveaway have been selected:

Thank you everyone for entering the contest. Stay tuned for more giveaways on iDB.