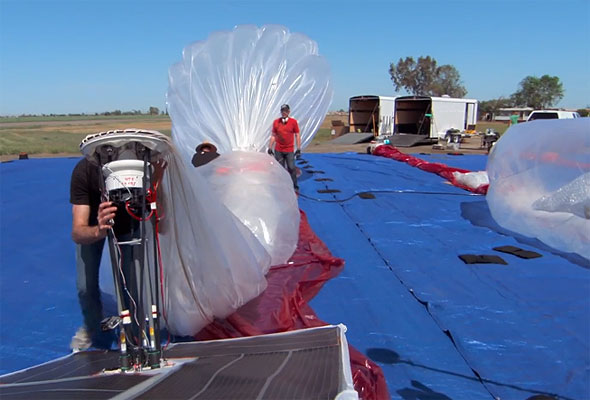 Google’s ‘X’ division has gained a reputation for making the seemingly impossible, possible. The not-so-secret lab is responsible for churning out a number of innovative projects, including self-driving cars and more recently, Google Glass.

Yesterday, the search giant unveiled X’s next ‘moonshot’ venture called Project Loon. The idea behind Loon is to let loose a ring of balloons, outfitted with cellphone tower-like tech, in the sky in an effort to provide internet to the masses…

Google explains the ‘Why’ behind the project in a blog post:

“The Internet is one of the most transformative technologies of our lifetimes. But for 2 out of every 3 people on earth, a fast, affordable Internet connection is still out of reach. And this is far from being a solved problem.

There are many terrestrial challenges to Internet connectivity—jungles, archipelagos, mountains. There are also major cost challenges. Right now, for example, in most of the countries in the southern hemisphere, the cost of an Internet connection is more than a month’s income.”

But the ‘X’ team says that they believe they can solve these challenges with balloons. In fact, they’ve already started building a system that uses balloons, carried by stratospheric winds at altitudes twice as high as commercial planes.

The balloons are capable of beaming internet down to people on the lands below with a connection speed that is, they say, similar to today’s 3G networks or faster. And they’re powered by nothing more than wind and solar energy.

Here’s a couple of videos that offer more details on Loon:

Google is currently running pilot tests in Canterbury, New Zealand, where 50 people are trying to connect to the Internet using the balloons. As the system gets refined, they’ll set up additional pilots in other countries and search for partners.

This is the kind of stuff that I love about Google. Project Loon is an ‘out-of-this-world’ kind of concept, but the research alone will benefit millions of people. Internet connectivity can work wonders for an area that didn’t previously have it.