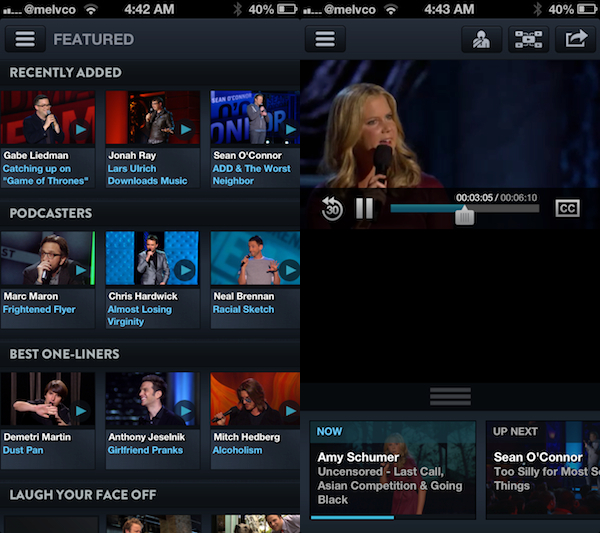 Though they didn’t like it at first, TV networks seem like they’re finally coming around to the idea of taking their content mobile. Most major networks now have at least part of their programming lineup available, on demand, in their mobile apps.

But the folks over at Comedy Central have taken things to another level. The Viacom-owned station just released an app called CC: Stand-Up, and it includes over 6,000 videos from its vault of both amateur and high-profile stand-up comedy footage…

-The CHANNEL is the ultimate place to sit back and laugh, get hours of the best stand-up without interruption. Like TV but better. No need to fight grandma for the remote.
-Our FEATURED mode brings you curated stand-up playlists based on a particular topic, recent Comedy Central special, or simply the very “best-of” from a comedy giant. Don’t ask us what curated means, look it up. We can’t do everything!
-Not sure what to watch? While viewing a clip in the app, click on the DISCOVER mode to find related comedians and videos connected by genre, topic, shared credits or random trivia. Think of it as Six Degrees of Stand-Up.
-Finally the app gives you the ability to SEARCH our stockpile of over 700 comedians and 6,000 videos — just type in a comic’s name or the title of a specific clip. Our library has everything you’re looking for, except a librarian. (We are working on this for future builds.)

Optimized for both the iPhone and the iPad, the app starts playing video as soon as you load it up (after a quick warning that some content may not be suitable for children). That’s the ‘Channel’ section of the app, and there are 2 others: Featured and Discover.

The selection of comedians is extremely expansive, and includes a lot of stand-up favorites like Louis CK, Gabriel Iglesias, Kevin Hart, Katt Williams, and Daniel Tosh. There’s even a search tool, so if you don’t see your favorite act right away, you can find them.

The only beef I have with the app is that I couldn’t find a video of a full performance—it appears it’s all 3-6 minute clips. That’s still enough to keep yourself entertained for hours, since videos automatically play back-to-back, but it’s something worth mentioning.

Regardless, CC: Stand-Up is worth downloading if you’re any kind of comedy fan. And as always, you can find it in the App Store, for free.