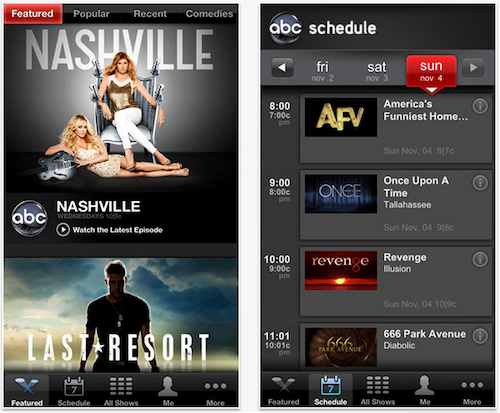 This is kind of interesting. ABC, a TV network under the Walt Disney umbrella, is set to revolutionize its iPhone and iPad apps this week. It’s going to be adding a new ‘Live’ viewing option to the software, which will [obviously] play live programming.

The live stream will work anywhere in a local market—as long as it’s supported— the same way an old-fashioned antenna would. And according to The New York Times, this is the first time that a major broadcaster has turned on this kind of technology…

“Internally the project was code-named Project Acela, a reference to thehigh-speed trainbetween Boston and Washington. A team led by Albert Cheng, Ms. Sweeney’s executive vice president for digital media, was given a deadline of May 14, the date of the ABC upfront. While Apple devices came first, other phones and tablets will be supported in the coming months, Mr. Cheng said. Securing the necessary rights from programming providers was laborious, but ABC will be able to stream all of its stations’ local newscasts, syndicated talk shows like “Katie,” and national series like “Grey’s Anatomy.”

Don’t confuse this functionality with that of other mobile apps. We’re not just talking about on demand programming here. We’re talking about live broadcasting of sporting events, news and reality shows—all the stuff you typically can’t watch on mobile.

Just imagine the possibilities here. You could start watching a show like Good Morning America while still in bed. Then switch to your iPhone sitting in a speakerdock while you’re getting ready, and to your iPad for breakfast. All without missing a beat.

Unfortunately, due to licensing restrictions, you’ll have to be a paying cable subscriber to activate the live-stream feature. And yes, that’s a bit odd, because you can receive the broadcast for free with an antenna since it goes out over public airwaves.

Anyway, ABC plans to debut the new service at its upfront presentation for advertisers on Tuesday. Initially, it will only be available in New York and Philadelphia, but the network says that it just closed a major deal this weekend to add 13 markets.