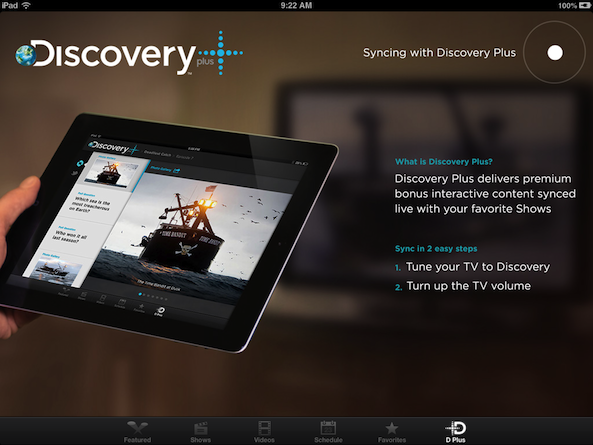 This is pretty cool. Discovery Channel Communications has released updates today for both the Discovery Channel and TLC iOS apps with a new interactive second-screen experience called ‘Plus,’ that promises to make TV watching more enjoyable.

For those unfamiliar with second-screen apps, they essentially allow users to sync their smartphones or tablets with TV shows/movies to serve up additional—meaning more than what’s being offered through the show itself—content to them in real-time…

Here’s the Discovery Channel’s description of what the ‘Plus’ second-screen experience is like (via 9to5Mac):

The feature sounds particularly interesting for Discovery, as you can imagine watching Shark Week and getting tons of interesting facts and photos streamed to your tablet. Or think about reality shows: it could be like a high-tech version of Popup Video.

Unfortunately, there are some caveats here. The developers are quick to point out that not all shows on the Discovery Channel and TLC are Plus-friendly yet, and the feature is only available on the iPad. Though they did say iPhone support is on the way.

Not interested in Plus? That’s ok, the updates include a few other nice improvements for the two apps. For instance, you can now see which TV shows are airing new episodes thanks to new scheduling data, in-app sharing is easier, and there’s a few bug fixes.

I haven’t bought into the whole second-screen fad, but I’m making it a point to check Discovery’s new Plus feature. If you’re interested, you can find the Discovery Channel app for both the iPhone and iPad, in the App Store for free. And here’s the TLC app.