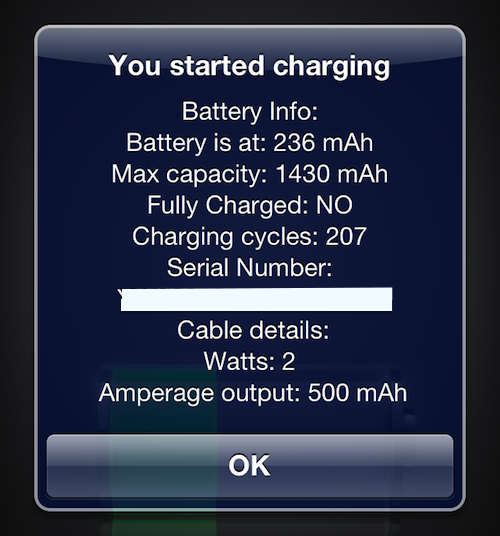 If your device’s battery life is a major concern for you, there are a number of jailbreak tweaks out there that will help you monitor and get the most out of it. There’s BatteryDoctorPro, Battery Status and BattSaver, to name a few.

Today we’re adding another one to the list, a new tweak called iBatteryInfo. This simple utility offers up all kinds of useful data, like whether or not your battery is fully charged, when plugging in and unplugging your iOS device…

There’s really not much to the tweak itself. It doesn’t have a Home screen icon, and there’s only a single option to configure in the Settings app: a toggle for enabling or disabling the tweak. But the data it offers is much more complex.

As you can see in the image above, iBatteryInfo gives you a wealth of information including how charged your device is (measured in mAh), what its battery’s max capacity is (also in mAh), and whether or not it’s really fully charged.

That last spec is nice because sometimes your device will say it’s fully charged, but it’s really not. Total charging cycles, your battery’s serial number and a few cable details like Watts and amperage output round out the available data.

I have no qualms with my iPhone’s battery life. It’d be nice if it would last two or three days with heavy usage, but I doubt any tweak could help with that. So although this tweak works as advertised, I probably won’t be keeping it.

But if you’d like to check it out for yourself, you can find it in Cydia, in the BigBoss repo for free.