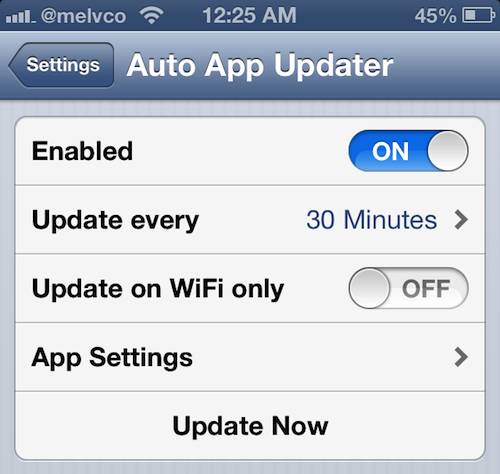 I’m on my iPhone all throughout the day, so when an update for an app pops up, I usually grab it right away. On my iPad, however, it’s a different story. Sometimes I’ll go a couple of days without using it, and the updates tend to pile up.

For those of you with a similar problem, you’ll be happy to hear that there’s a jailbreak tweak called Auto App Updater that can automatically install your updates for you. So you’ll never have to worry about installing them manually again…

Auto App Updater was written by a developer named Noppers, and it’s essentially your standard tweak. There’s no app icon, as all of the package’s options are configured from the Settings app. And you can pretty much set it and forget it. 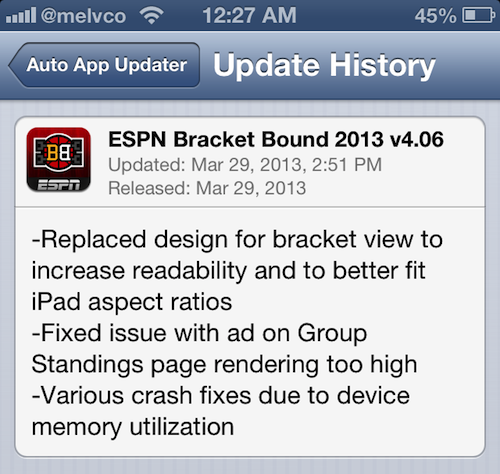 Those options include an Enable toggle—which I’ve said every tweak should have, a menu to set the amount of time between updates, a handy ‘Update on WiFi only’ toggle, and an app list so that you can enable auto updates on a per-app basis.

I played around with the tweak a little bit last night, and so far it seems to work great. It installed two app updates—one during the hourly scan I set up, and one by me pressing the convenient ‘Update Now’ button—and I didn’t notice any issues.

My only reserve about Auto App Updater is that there are some app updates that shouldn’t be installed (the recent Chrome fiasco comes to mind). But if the reward outweighs the risk for you, you can find the tweak in ModMyi’s repo, for $2.99.