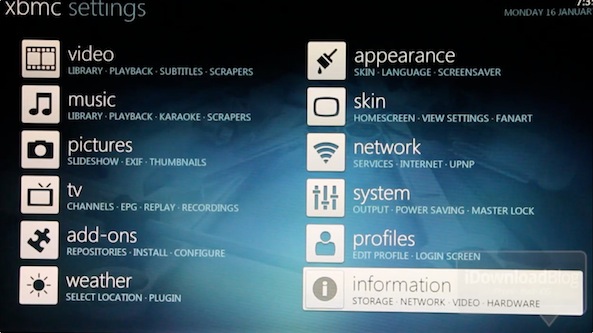 Popular open-source media player XBMC has been updated today, bringing the app to version 12.1. The update improves the experience across all of Apple’s platforms, including the Mac, iOS and Apple TV.

For most users, the iOS update will be the most welcomed change, as it brings about support for the iPhone 5’s larger 4-inch display. And Apple TV2 users will be similarly pleased with further support for iOS 6…

For those who aren’t familiar with the app, XBMC is a free and open-source media-player that features a number of plug-ins for streaming services like Pandora and YouTube, and supports several media formats.

If you’d like to install XBMC, we have step-by-step guides for both Apple TV, and iPhone, iPad, iPod touch users. Just keep in mind that your device must be jailbroken, meaning you’ll want to avoid today’s update.