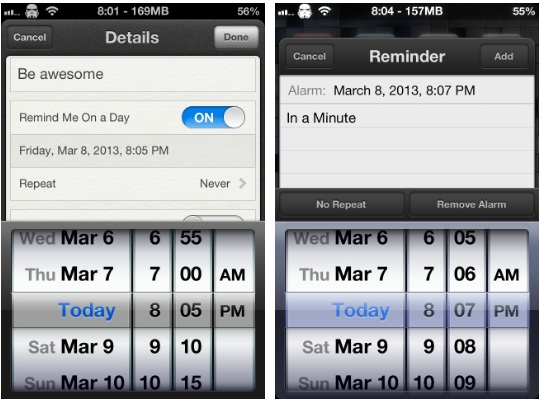 If you’re a heavy user of Apple’s Reminders app, then you’ll quite possibly have nudged up against one particular issue that some find irritating while others will likely have never even noticed.

The issue in question is Apple’s assumption that people will only want to set reminders in five minute increments, meaning you can’t set a reminder for 09:13, for example, unless you’re creating the reminder with Siri’s help. It might not sound like much, but if you want to manually set a few reminders to alert inside a five minute window, then you’re out of luck.

That is, unless you install a new jailbreak tweak that popped up in Cydia today…

Named “In a Minute,” the tweak is free and available via the BigBoss repository. Once installed, it will simply add one minute increments to the standard time wheel when setting new reminders inside Apple’s Reminders app. That’s it, short and sweet.

The tweak itself was inspired by a similar solution for the Calendar app, called “Every Last Minute,” which just goes to show that the jailbreak community is always looking to itterate, filling gaps as it goes along. It’s one of the reasons we love jailbreaking here at iDownloadBlog, and thanks to the great developers out there, things will only continue to improve.

If you’ve never even noticed the Reminders app’s time-based limitation, then chances are you won’t be rushing to download this particular tweak. If you have, though, then it’s well worth a look.

UPDATE: The developer of the tweak let us know that it actually modifies all standard date pickers system-wide, not just in the Reminders.app.