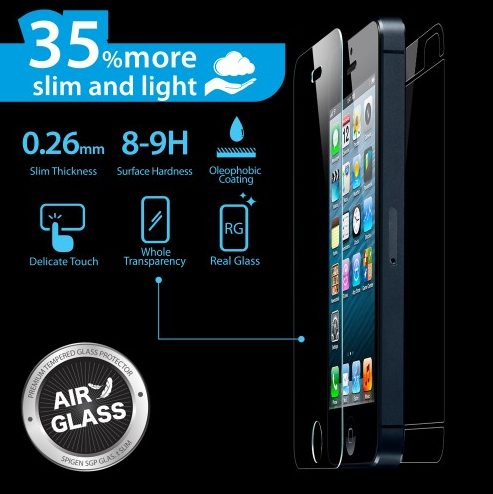 I have a hard time hiding my love for the GLAS.t family of screen protectors for one simple reason: I just think they’re the best. A few months ago I reviewed the GLAS.t, which I believed was the best screen protector for iPhone 5, but things just got even better!

The fine folks over at SGP sent me their new GLAS.t Slim for iPhone 5 for review. I’ve been sporting it for a little over a week now and I’m here to give you a quick review of the product…

For those of you who are not familiar with GLAS.t yet, it’s a screen protector made of tempered glass that’s as close as it gets to the touch sensitivity of your actual iPhone screen. This being said, let’s see what’s good and bad about the GLAS.t Slim.

Obviously, the best thing about this screen protector is that it’s made of glass. I don’t know about you but I’m not a big fan of plastic screen protectors. As good as they are, you can always tell they’re here, if not visually, you can tell by the sensation they leave on your fingertips when touching the screen. It just doesn’t feel right. Having a glass screen protector makes the touch experience as good as it is on your actual iPhone screen.

I’ve talked extensively about the GLAS.t before, and something that really bothered me was the thickness and added weight of the screen protector. What sets the GLAS.t Slim apart from other versions is that it is much thinner. At 0.26 mm thin, it’s actually 35% thinner and lighter than the previous model I reviewed, making a huge difference when holding your iPhone in your hand. While the original GLAS.t made your iPhone feel fat and heavier, the GLAS.t Slim, is barely noticeable. Barely… 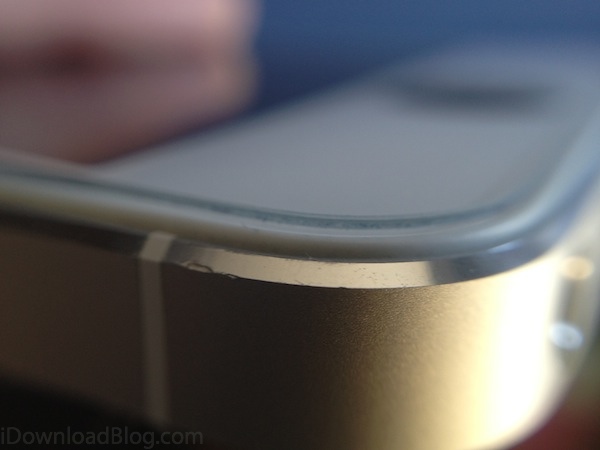 This is what a 0.26mm glass screen protector looks like on an iPhone 5

As thin as it is, it still provides that same hardness and protection as the older model. For the purpose of this review, I didn’t hesitate to try to scratch the screen using a knife, which didn’t do anything to the screen as far as I can tell. Although it crossed my mind, I didn’t dare dropping my iPhone face flat on the floor which probably would be the ultimate test (I was worried I might actually damage the edges of the phone if it didn’t fall completely flat). Even if I had, I’m confident my screen would have been fine although the anti-shatter GLAS.t Slim would have probably broken.

The GLAS.t Slim also comes with a crystal and matte back cover protection film, which I must say is pretty awesome. Although I was a bit skeptical at first, I installed the back covers anyway in order to give it a fair try. Of course, being a PET film, it’s incredibly thin, but most importantly, you would never be able to tell it’s here. It seamlessly protects the back of my beautiful white iPhone 5, and I can’t even tell it’s there? I’m sold.

I’ve seen a lot of complaints about the installation process from several users, and I have to admit that the installation still leaves a lot to desire. Basically, you only have one shot at making it right. If for some reason you mess up the install, well, sorry but you won’t be able to re-adjust the screen protector. This being said, I’ve installed half a dozen GLAS.t on various devices and I’ve never had a problem. But again, I’m very careful about those things. If you’re a bit sloppy, I wouldn’t suggest you try installing this screen protector.

By now you’ve probably figured out that I’m still a big proponent of the GLAS.t Slim. I loved the original GLAS.t and I love this one even more because it addresses the only two real concerns I had about it: weight and bulk. Now being 35% thinner and lighter while still being as strong as its predecessor, the GLAS.t Slim gets two thumbs up in my book.

The GLAS.t Slim sells for $28 on Amazon. I’d agree this isn’t cheap, especially when you can buy 200 screen protectors for $3 on eBay, but it must be said that the GLAS.t Slim is not for everybody. If you want a visual and touch experience as close as it gets to the actual iPhone screen, this is your best bet. If however this isn’t a concern for you, then you’ll find many more affordable options somewhere else.