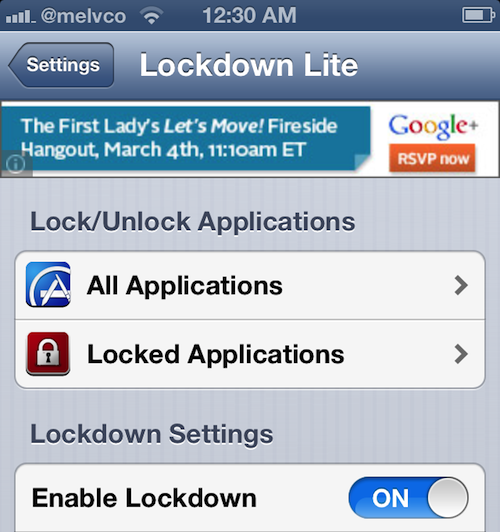 Lockdown Pro, the popular jailbreak tweak that allows you to password-protect individual apps and folders on your iPhone, was updated this week with some new features and improvements. It can now hide apps, and it feels much speedier.

But the big news is that in addition to the update, the developer has also released 3 new Lockdown Pro packages. There is now an iPad version of the tweak, as well as two free ‘Lite’ versions—one for the iPhone/iPod touch and one for the iPad…

The iPad version is exactly like the iPhone version, except that [obviously] it supports the tablet. It installs into your Settings app, and allows you to “lockdown” any apps or folders that you’d like to prevent people from opening, with a password.

As for the Lite versions, they’re surprisingly capable. They still allow you to password-protect apps, folders and photos, and are still compatible with Activator. But as you’d expect, they both feature advertisements, and are missing several options.

So what do you get if you pay for the apps? In addition to the above features, Lockdown Pro allows you to hide applications, and launch them with an Activator function, lock/unlock apps from your Homescreen, set Lock delays, and much more.

After testing out the Lite iPhone version with a number of apps (both locking and unlocking) I can confirm that it’s as solid as the original. I don’t have anything in my phone worth password-protecting, but for those that do, it’s worth checking out.

If you’re interested, you can find all 4 versions of Lockdown Pro in Cydia, in the BigBoss repo. The paid iPhone and iPad versions will cost you $2.99 a piece, and of course, the Lite versions are free.

Have you tried the new Lockdown Pro? Or do you use another app for password protection?