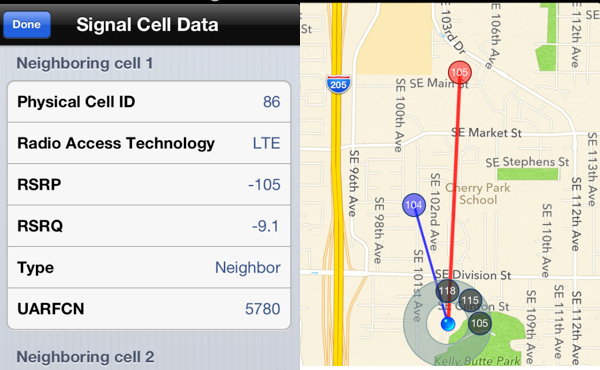 Planetbeing, known best for his work on the new evasi0n jailbreak, is also a developer of apps and tweaks. He helped write the popular IntelliScreenX tweak, and has an app called Signal, among other things.

And this afternoon, an update for Signal—aptly-named Signal 2—popped up in Cydia. Planetbeing announced its arrival on Twitter, saying that the new version now works with both CDMA and GSM devices.

So what does it do?

The app does a couple of things. First, it displays information about the cell towers in your area. It shows the tower your iPhone is connected to, as well as other nearby sites, and displays them neatly on a map.

Second, it offers up a range of technical data, including RSCP, which is signal strength, and Ec/N0, which is signal quality, to all of your local towers. It also shows the frequency at which each one is broadcasting.

So essentially, Signal 2 paints you a detailed picture of what the cell phone coverage is like in your immediate area. And while it might be a bit much for most people, it could certainly come in handy while traveling.