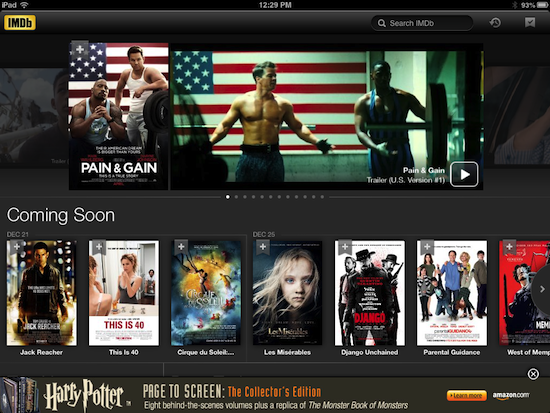 You can still use the app to research your favorite actors, watch movie trailers, or look up your favorite TV and film trivia, but version 3.0 lets you do it all in style…

IMDb has added some new features across its iPhone app as well. My favorite one has to be that it now supports iOS 6’s native Facebook integration, so now you can share a page for a movie or actor on Facebook with a single tap. Also, filmographies now include TV episode details and image galleries are easier to access.

Alongside the update, IMDb also published a press release with some pretty impressive stats regarding its mobile software. Its iOS and Android apps have each been downloaded more than 25 million times for a total of more than 50 million combined user downloads. I honestly had no idea the app was that popular.

At any rate, if you’re interested in checking out IMDb’s redesigned iPad app, you can find it in the App Store, for free.