A strange thing has just happened: Google has posted its third-quarter earnings prematurely, giving Wall Street analysts and investors a pause as the company missed expectations substantially. Compared to Google’s stellar results in past few quarters, largely driven by soaring sales of ad slots and Apps hosted solutions for businesses, the September quarter saw the search giant stumble a bit.

The Mountain View, California-headquartered company reported a huge 20 percent dive in net income to $2.18 billion (operating income was $3.26 billion). Net revenue was $11.3 billion versus the $11.9 billion that investors had been expecting. Google earned $9.03 a share versus an analysts’ estimate of $10.65, a huge disappointment  analysts had expected, on average.

Doesn’t look good at all. I guess that $12.5 billion acquisition of unprofitable handset maker Motorola Mobility has really ‘paid off’, so to speak…

For a three-month period ending September 30, Google reported $45.7 million in cash – which includes the money in bank, but also cash equivalents and various short-term marketable securities.

Google’s Motorola subsidiary posted an operating loss in the second quarter so Google in August trimmed the fat by letting go one-fifth of Motorola’s global workforce. For the third quarter, Motorola raked in $2.58 billion in revenue but reported a $527 million operating loss: $505 million from the mobile biz and $22 million from Motorola’s home business.

Google noted as much in the filing:

Motorola last month unveiled the new Droid Razr lineup, including the Droid Razr HD depicted in a promo clip below.

As for today’s blunder, Reuters reports that Google’s “surprise announcement” stunned investors who had been bracing themselves for an earnings release after the market close, as is customary.

The move rattled big boys on Wall Street, who punished shares which lost nine percent to $687.30.

Google Inc stunned Wall Street on Thursday with a significant miss on both revenue and earnings, wiping 9 percent off the market value of the Internet search and advertising leader.

The unexpected release, via a filing with the Securities and Exchange Commission, triggered a selloff in Google shares. Shares dropped about 9% before trading was suspended. The results missed expectations and the company released its results several hours earlier than expected. 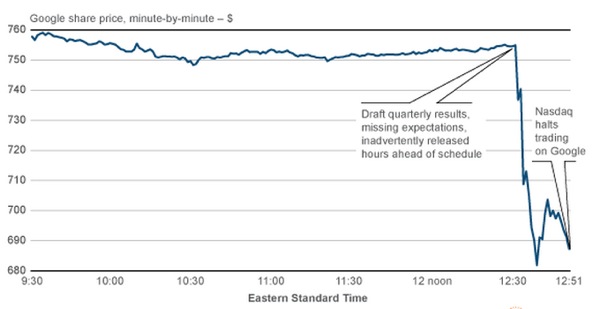 The full filing was meant to be approved by the CEO, but it leaked:

The filing provided Google’s financials for the quarter, but was obviously released prematurely, as it included near the top “PENDING LARRY QUOTE” a reference to Google CEO Larry Page.

Bloomberg reports that Google has blamed financial printing company RR Donnelley for sending its earnings to the SEC incomplete and premature:

That has got to be a very expensive screw up.

Pretty sure a few heads will roll today in Mountain View, California.

I’m still puzzled as to how a company of Google’s size can afford such a misstep to release bad news prematurely.

It was inadvertent, or was it?

Did Google do this purposefully?

Just what was it hoping to achieve?