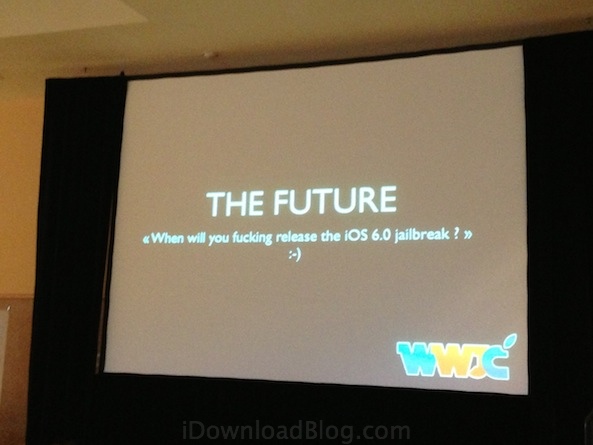 iOS hacker extraordinaire, and my new friend since this week, pod2g just took the stage at JailbreakCon. After going over who he is and his hacking CV, pod2g went on to explain how he came up with Absinthe, his iOS 5.1.1 untethered jailbreak.

As pod2g explained to me, the iOS 6 jailbreak that Chpwn teased us with last week is merely a start, and is still far away from turning into an actual, usable jailbreak.

But like pod2g said on stage today, after talking with other iOS hackers such as PlanetBeing, there is a slim chance that they might start working hard on this jailbreak and may have something to base their research on in the near future.

But again, there is nothing concrete at this time, and you should not hold your breath.

I’ll be doing an interview with pod2g later on for those of you that are interested in learning more about the man.