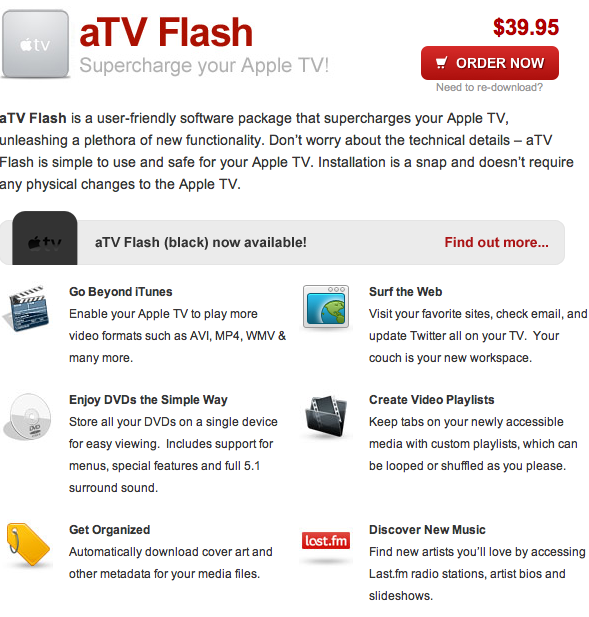 FireCore has today released a significant update for its first-generation Apple TV software known as aTV Flash. The app installs on jailbroken ATVs and adds a number of new features.

Among the changes in the update are Mountain Lion (or OS X 10.8) compatibility and some major performance enhancements. We’ve got the full change log after the break…

“aTV Flash 4.5 for the 1st generation (silver) Apple TV is now available. Version 4.5 includes support for OS X 10. (Mountain Lion) as well as a handful of general improvements and fixes. We’re also still working on a number of additional features for the 1st gen models and plan to have additional updates available soon.

– Other miscellaneous improvements and fixes”

If you already have aTV Flash on your Apple TV, you can update to the new software via the Maintenance tab. Otherwise, you can purchase it from FireCore’s website for $39.95.

Of course, FireCore’s aTV Flash software is available for the second-generation Apple TV as well. It’s called aTV Flash (black) and can also be found on FireCore’s website for $29.95.

Unfortunately, there’s still no word on the ATV 3 jailbreak, and we don’t expect there to be anytime soon.