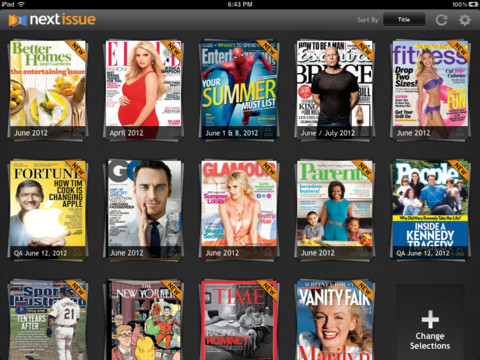 We’re getting used to iOS exclusives getting ported to Android, so here’s a reversal of this trend. Next Issue Media just jumped the shark by releasing an iOS client which lets you access their entire catalog of digital magazines beginning at a breakthrough all-you-can-eat flat fee of just ten bucks a month. Looks like Zinio may be in for a fight…

Next Issue Media, a joint venture of five U.S.-based publishers (Condé Nast, Hearst, Meredith, News Corp. and Time Inc.) told Reuters today that its digital magazines are now available in the U.S. on all iPad models.

You can buy individual editions or subscribe to an unlimited plan on their website, with these plans available:

In case you haven’t noticed, an unlimited subscription gets you literally all Next Issue magazines for a flat monthly fee. These price points work out to $120 for monthly titles or $180 for monthlies and weeklies a year.

Shawn King called the offering in his post at The Loop “the Netflix business model for magazines”. TIME thinks flat-rate pricing is “a game-changer”. 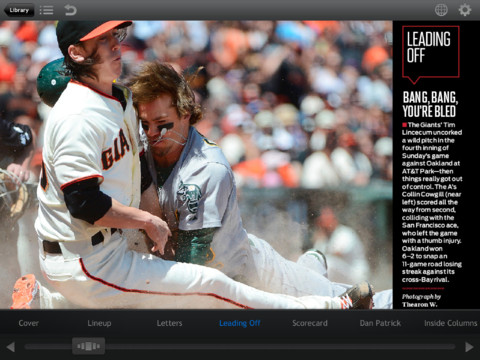 They’ve got 39 digital magazines on offer, including popular titles such as TIME, Esquire, Sports Illustrated, Wired, Vanity Fair, Bon Appétit and Golf Digest. Additional titles, including ones not owned by the partners in this venture, will be added in the future (they are planning on doubling the catalog by the year’s end).

Search, personalization and social features are all being promised for future updates. Unfortunately, magazines are not presented with Retina support, which could be a temporary deal-breaker for owners of the new iPad, at least until a Retina update arrives “later in the year”.

Individual issues are browsed, accessed and delivered via a free iPad storefront app rather than using the per-magazine app model. Another benefit: all magazines are presented using a unified interface. And if you’re already subscribed to dead tree editions, you can add digital versions of the same titles for free or “a nominal cost”. 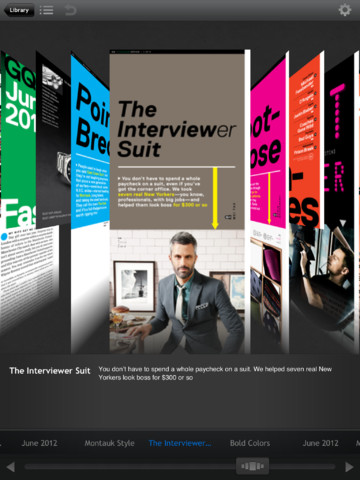 Both Unlimited Basic and Unlimited Premium models offer access to back issues back to the beginning of 2012. Individual magazine subscriptions begin at $1.99 a month and go all the way up to $9.99 a month. Single magazine issue will set you back from $2.49 to $5.99 per issue. All subscription plans include a 30-day free trials.

It will be hard to resist this offering. According to AdAge, digital represents just one percent of the industry’s circulation so here’s to hoping that Next Media helps up the percentage for tablet magazines.

Individual magazine subscriptions available at the iOS Newsstand cost north of ten bucks a month so you’re basically getting dozens of premium magazines for the price of just two monthly subscriptions.

And compared to print, digital magazines are offered at bargain prices. For example, TIME is normally $30 a year for an All Access subscription (print, digital and web access), The New Yorker is $60 a year and Esquire is $20.

Will you take the plunge?