You simply gotta appreciate this little nugget. Here we have a unique case for the iPad 2 that flips open origami-style. It ain’t a joke, this thing actually works as advertised.

Not only does it automatically transform into a versatile stand by simply opening the cover, the FlipSteady case – a Kickstarter project by Isaiah Coberly – also fluidly transitions between a variety of standing positions.

But don’t take our word for it, check out a clip of the FlipSteady case in action…

The bottom structure of the stand conforms to rounded or slanted surfaces and can be totally flattened for comfortable typing by releasing the tether on the front of the case. 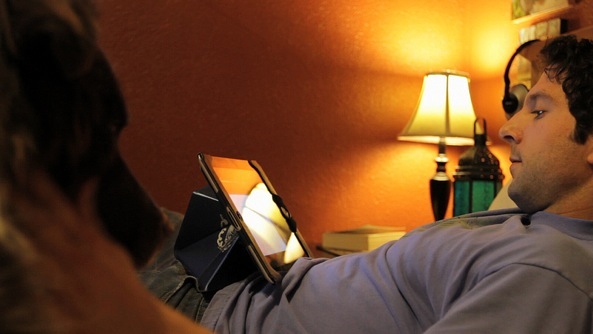 And because it’s based on the origami concept, the FlipSteady case lets you prop, wedge or hang your iPad in numerous ways.

The case is actually really close to getting released as they’re closing in on their original funding goal.

Check out the video embedded below.

You can secure your FlipSteady sample over at Kickstarter. The $65 non-magnetic version has snap fasteners and a non-slip footing. Its $75 magnetic counterpart has strong enough magnets to stick the case with the iPad inside to a refrigerator.

If you’re willing to take the plunge, bear in mind that the case won’t ship until August.

I don’t know about you, but I’m getting one of these. Smart Cover is getting a bit outdated and this one’s bound to turn heads.

Is this a typical example of form over function or a must-have?