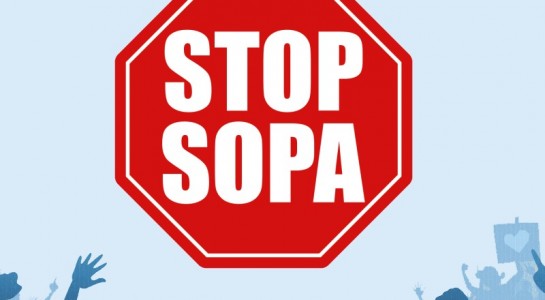 If you’ve been online at all in the past few days, chances are you’ve come across a number of sites protesting SOPA. The Stop Online Piracy Act bill is currently making its way through congress.

Several websites have taken steps today to raise public awareness of the dangers of SOPA including Google, Reddit, and Wikipedia. And since the bill, if passed, would directly affect the jailbreak community, we figured we’d do the same…

So first off, what is SOPA all about? Brian Barret of Gizmodo offers a detailed explanation of the anti-piracy bill. But for all intents and purposes, it can be summed up by this excerpt:

“The beating heart of SOPA is the ability of intellectual property owners (read: movie studios and record labels) to effectively pull the plug on foreign sites against whom they have a copyright claim. If Warner Bros., for example, says that a site in Italy is torrenting a copy of The Dark Knight, the studio could demand that Google remove that site from its search results, that PayPal no longer accept payments to or from that site, that ad services pull all ads and finances from it, and —most dangerously—that the site’s ISP prevent people from even going there. Perhaps the most galling thing about SOPA in its original construction is that it let IP owners take these actions without a single court appearance or judicial sign-off. All it required was a single letter claiming a “good faith belief” that the target site has infringed on its content.”

So why do we care? As Joshua Hill, better known as p0sixninja of the Chronic Dev Team, points out, SOPA could make the distribution of jailbreaking software illegal — which would greatly affect our business of bringing you the latest in jailbreak news and tutorials.

Even though the US Government made jailbreaking legal back in 2010, the distribution of jailbreaking software could be deemed illegal under SOPA because it contains Apple’s [reversed-engineered] IP. That would mean that one phone call from the Cupertino company could effectively shut down sites that host the software. Wow.

So what can we do? As several other sites have suggested, we recommend that if you live here in the States, you call or email your respective congressmen. If nothing else, help spread the word around the web about what SOPA really is and the repercussions we could face if it gets passed.