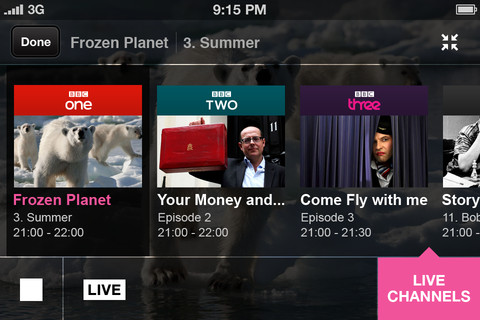 UK-based fans of the BBC can now get their fix of Dr. Who while out and about with the newly-updated BBC iPlayer app. The update adds support for the iPhone and iPod touch.

The new release offers some interesting features, including 3G streaming and live TV access to go with the expected on-demand video streaming.

In a press release announcing the new app’s availability, the BBC was quick to pat itself on the back, claiming that 1.5 million users already take advantage of its iPlayer on the iPad.

If you happen to still listen to BBC radio, then you are in luck. The new iPhone iPlayer app streams not just video, but radio as well. This leaves us with just one question to ask: is it still radio when it’s streaming over IP? Answers in the comments, please!

“You can listen to any of the BBC’s national radio stations in the app. To make this easier, we have enabled background audio so you can do other things on your phone, like check mail or surf the web, while listening to your favourite BBC radio station.”

This free app is currently only available in the UK. Finally, something that those on the European side of the pond have that Americans don’t!