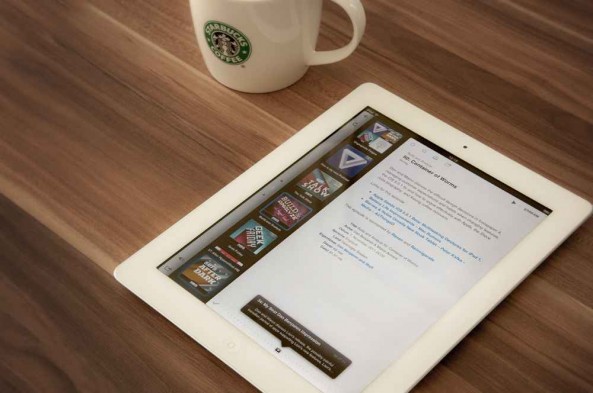 Every now and then an app comes out that just makes sense. Most apps have their quirks, but few are able to, in the words of Steve Jobs, “just work.”

We told you about Instacast when it originally launched on the iPhone, and Instacast HD has just been released for the iPad. If you like to listen to podcasts, Instacast is the app you’ve been waiting for.

Any podcast fan knows the pain of managing and syncing shows in iTunes. In the world of iCloud and wireless syncing, it seems antiquated to have to move episodes back and forth between devices manually.

That’s where Instacast comes in. 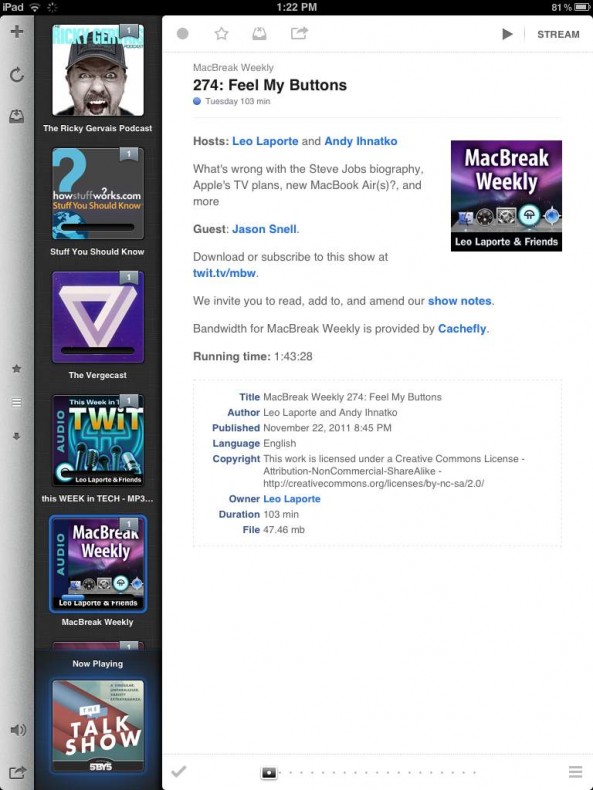 Instacast not only streams your podcasts, but it syncs them between the iPhone and iPad, all thanks to iCloud integration. Instead of having to worry about what device your podcasts are on and where you last left off on another device, Instacast handles everything for you.

Instacast HD is the evolution of a fantastic iPhone app that was begging for an iPad brother. You can now listen to all of your shows, cache episodes for offline listening, read show notes, and web browse on the iPad’s 10″ screen. Intuitive gestures, a beautiful interface, iCloud syncing, and push notifications are all icing on the cake. 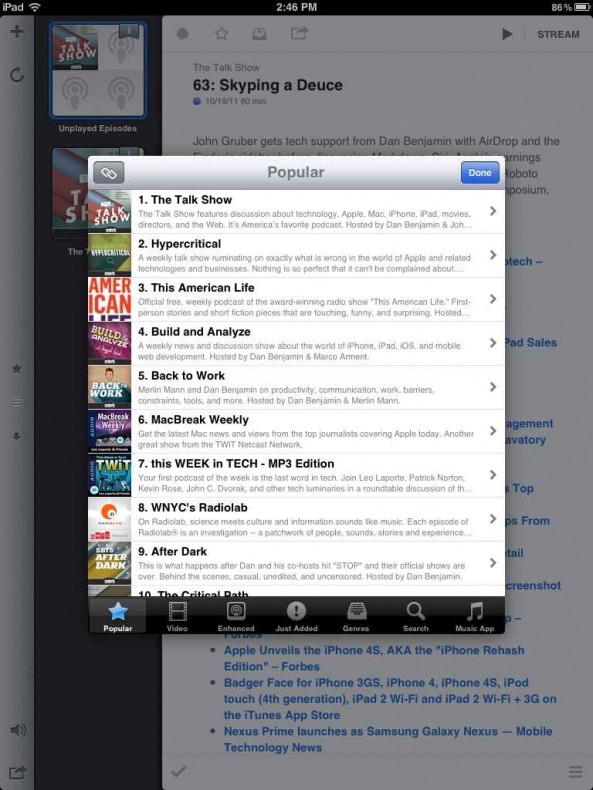 30,000+ of the best podcasts out there (both audio, enhanced, and video) are collected in a popup pane when you first open Instacast HD. When you subscribe to a show, episodes are automatically delivered into the app’s left sidebar for streaming or downloading. Each show gets its own album cover in the vertical slider, and you can scroll through and swipe over each cover for playback info and more details.

New shows can be added by tapping the “+” button at the very top left of the app. Instacast HD borrows several interface elements from popular apps like Reeder and Twitter for iPad, so you’ll probably feel right at home when you first open the app. 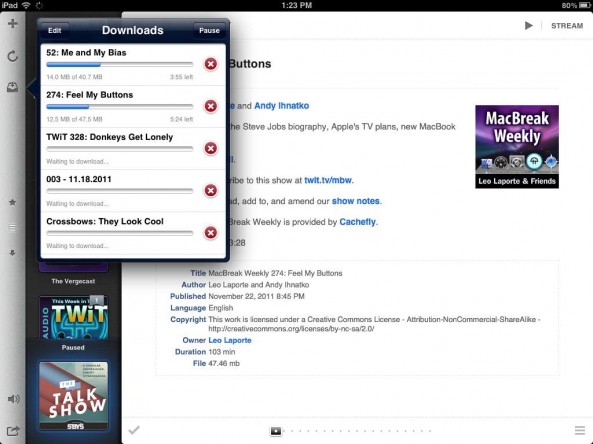 Once you enable iCloud sync, episodes and playback statuses are automatically synced back and forth between the iPhone and iPad app. Instacast HD’s Download Manager lets you cache certain episodes for offline listening. Downloads can be managed and rearranged to have priority in the manager — a perfect feature for the frequent flyer.

While Instacast on the iPhone is perfect for listening to podcasts on the go, the iPad experience is optimized for sitting back and relaxing with a nice drink. An episode’s show notes are front and center in Instacast HD, and you can browse through links in the app’s wonderful browser. You can send links to services like Instapaper and Read It Later, and even tweet links in-app to your friends. 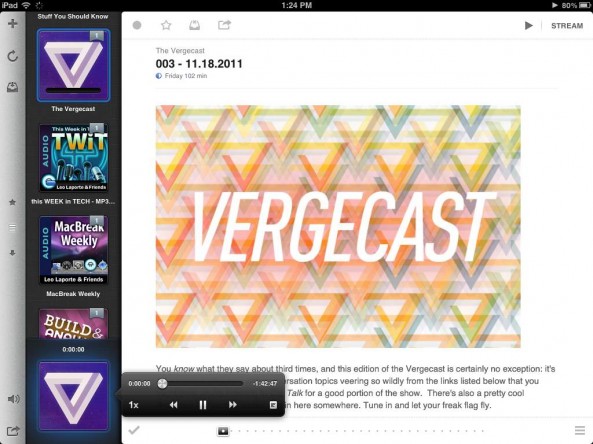 When you’re playing an audio show, you have access to a handy “Now Playing” window with playback controls anywhere in the app. You can star certain shows for quick reference and pull in podcasts from iTunes, RSS, or your iOS 5 Music app.

Video podcasts in Instacast HD work marvelously, and there’s AirPlay integration to send what you’re watching to your Apple TV.

Instacast is the future of listening to podcasts, and my only complaint is that there isn’t a Mac version yet. You can download Instacast HD for iPad in the App Store for $4.99. The iPhone version is also available for $1.99.

The developer of Instacast, Martin Hering, has been kind enough to give away three copies of Instacast HD to lucky iDB readers!

How do you win? It’s easy: simply leave a comment below telling us why want Instacast HD. Creativity is always a plus!

Update: Winners have been contacted via email.