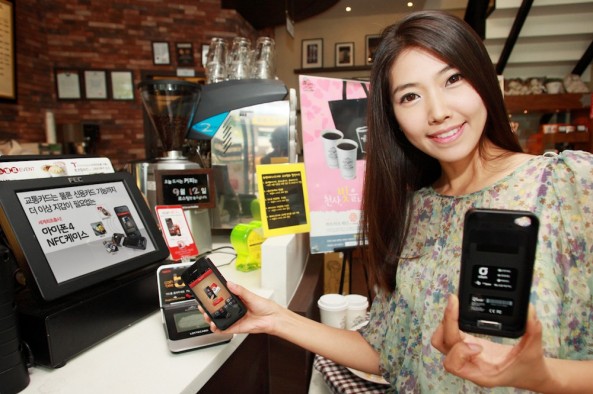 With circulating rumors that Apple will eventually introduce an iPhone with NFC technology, South Korean carrier KT Telecom is taking matters into its own hands. KT has launched the iCarte 420K NFC case for the iPhone 4.

“With the recent launch of NFC-enabled smart(phones), iPhone users were showing increasing needs for NFC services, Hyunmi Yang, executive vice president for integrated customer strategy at KT, said in a statement. As a global leader of NFC services, KT plans to provide more convenient and differentiated NFC services to its customers.”

KT’s service includes a prepaid “transit card” that allows iPhone users on the network to use their smartphone as a method for payment on the go. The nation’s credit card companies are expected to jump on board with service as early as next month.

This South Korean carrier only has 1.9 million iPhone customers, and executives plan to sell 25,000 iCarte attachments. Subscribers will be able to use the iCarte at public places like local restaurants, retailers and entertainment venues. Some merchants will even offer discounts for KT’s NFC service customers.

The carrier’s executives noted that they believe that Apple will introduce an iPhone with an embedded NFC chip next year.