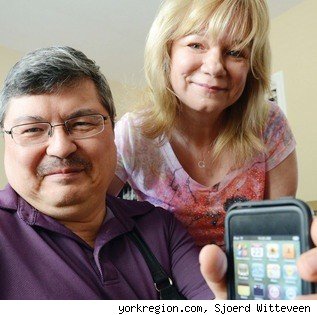 As much as we’ve made fun of the terminology, Apple’s iDevices seem to have lived up to the “magical” expectations we’ve heard tossed around in Apple’s own commercials. Remember Holly Bligh? Her sight problems required her to lug around clunky assistive equipment — until she got an iPad.

And that’s not the only success story we’ve heard. Apple’s easy-to-use devices have been deployed in several programs for autistic children, and their tablet is replacing textbooks in some school districts. Now comes a story out of Ontario, Canada, about how the iPod touch is helping amnesiacs…

TUAW passes along a story from YorkRegion.com, which spotlights David Dorey, a former radio frequency design engineer that suffered a brain aneurysm back in 2004. David is one of the many patients benefiting from the Memory Link program, headed by Ontario-based Baycrest.

The project equips amnesia patients with an iPod touch and other gadgets to act as their memory, so to speak. The participants use the devices to take video, pictures, and record thoughts throughout their day, so they can later recall people they’ve met and other events.

Since the patients have issues creating new memories, teaching them to use the devices can be a tough task. But with structured lessons to teach procedural memory, and iOS’ pick-up-and-play usability, the program seems to work quite well.

As TUAW notes, the cool part about this program is that amnesia sufferers won’t stand out in a crowd. If they are struggling to recall something, a glance at their iPod touch doesn’t draw attention. iDevice or not, it’s good to see people getting more out of technology than a tweet or a status update.