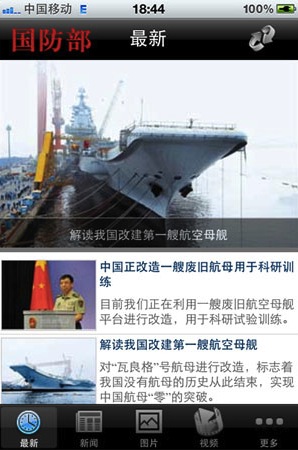 People’s Liberation Army (PLA), aka the unified military organization of China, has been under scrutiny for the past few years for being the second largest military in the world in terms of budget, right behind the US.

To relieve stress from neighboring countries and also the rest of the world, the PLA thought it wouldn’t be a bad idea to be more transparent about its military capabilities and intentions, and so they decided to create an iPhone application.

“But there’s a catch: the new app is not available at the official Apple Store. Users who download the PLA app will have to “jailbreak” their iPhone – hack into the operating system – before installing it.

At this time, it’s unclear whether the app was ever sent to Apple for inclusion in the App Store. Maybe it just got rejected? Or maybe it was never submitted to Apple?

Apparently, you can find instructions on how to download this application on the Defense Ministry website. I assume that you will have to add a specific repo and download the app from there.

Would you install a jailbreak app developed by the PLA on your iPhone? If I had any interest in the Chinese military, I definitely would think twice before installing the application. Who knows what it may do in the background.