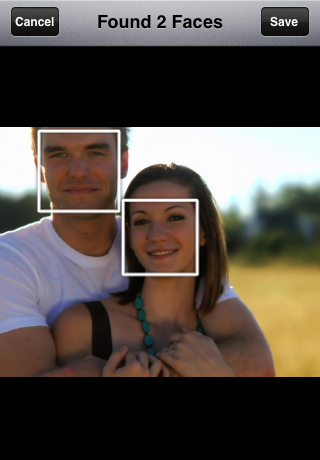 The folks over at 9to5Mac have found some more interesting information buried within iOS 5’s code. The Mac blog that loves to expose hidden features in Apple’s upcoming mobile software has just found another secret gem.

When Scott Forstall took the stage last month, he failed to mention some of iOS 5’s most compelling features. iOS 5 has the ability to take panoramic pictures, recognize voice commands, and it apparently even has facial recognition software…

If you kept up with Apple’s startup-shopping spree last year, you might recall that one of their purchases was a Swedish company named Polar Rose. The firm specializes in — you guessed it — facial recognition technology.

It looks like Apple is finally implementing the company’s tech, as 9to5Mac has come across 6 API’s found in the iOS 5 SDK (Software Development Kit) that have to do with face detection:

“We have taken a look at these iOS 5-exclusive APIs and they are highly sophisticated. The first, called CIFaceFeature, can determine through an image where a person’s mouth and eyes are located. The second API, CIDetector, is a resource within the operating system that processes images for face detection.”

So, is Apple planning on using the technology to sort pictures in an updated Photos app, or will facial recognition be another option to unlock iDevices? We’re not sure. In fact, it doesn’t look like Apple is developing any sort of in-house software with the API’s. It appears to be for 3rd party developers.

It’ll certainly be interesting to see how app-makers (or Apple) end up using the technology. While I don’t see a “Scan to unlock” feature being very useful, it would be cool to keep track of contacts throughout all of your media and social media by face-sorting.

There’s a jailbreak app called RecognizeMe that already does facial recognition for unlocking the iPhone.

What do you think? How would you like to see facial recognition used in iOS 5?