Yesterday, we told you about the promo video that leaked detailing the upcoming Skype for iPad app. It was later confirmed by Skype that the video was real, and that Skype’s official app for the iPad will be available in the App Store next week.

CNET has a hands-on look at Skype’s unreleased app for the iPad, and the long-awaited app is set to go live in the App Store on Tuesday… 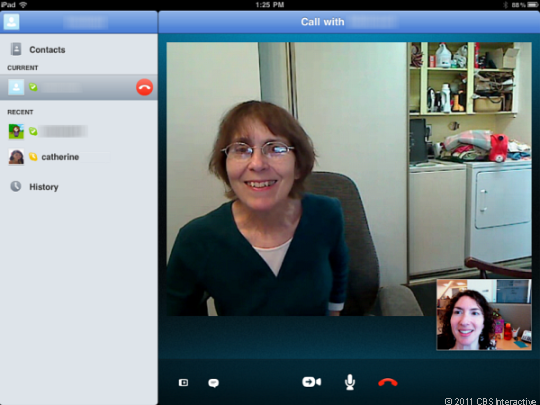 “You won’t find Skype for iPad available in the App Store until Tuesday, but we got a hands-on look, with plenty of pictures and testing, with the forthcoming app. The new iPad-optimized Skype client will take advantage of the tablet’s larger screen real estate, making for crisp and clear video chat over Wi-Fi, and often less crisp chat over 3G.”

The first generation iPad will not be able to send video on Skype for iPad. The original iPad can still receive video. The iPad 2 makes use of both cameras for video conferencing.

The app’s chat functionality seems to be what would be expected,

“The chat interface isn’t as polished or snazzy as we’ve seen for other iPad apps, but it’s fairly intuitive. Contacts are on the left with your text messages on the right. In our tests, chat over 3G or Wi-Fi worked predictably smoothly.”

Although you will be able to make calls over 3G on Skype for iPad, CNET found that the quality was often “subpar.”

“During our preliminary tests today, we made calls over Wi-Fi to an iPhone 4 (3G) and to Skype on a desktop computer with a hard line. Wi-Fi video calling to the desktop produced the best quality on both ends, with high image resolution and video that was mostly smooth; there was only a slight delay. During a call, our friends notices almost no difference in video quality when we switched between the front- and rear-facing iPad 2 cameras; they told us that both images had sharp edges and nothing looked especially blurred.

We were also able to easily send and receive chat messages while a video call was connected, although the chat window and keyboard obscured almost the entire image, and we had to manually close the keyboard when we were done so we could see the video again, a slight inconvenience.”

As with any VoIP service, quality is always based on the availability of bandwidth on both ends of the call. But the Skype for iPad app seems to suffer with noticeable connection quality issues. 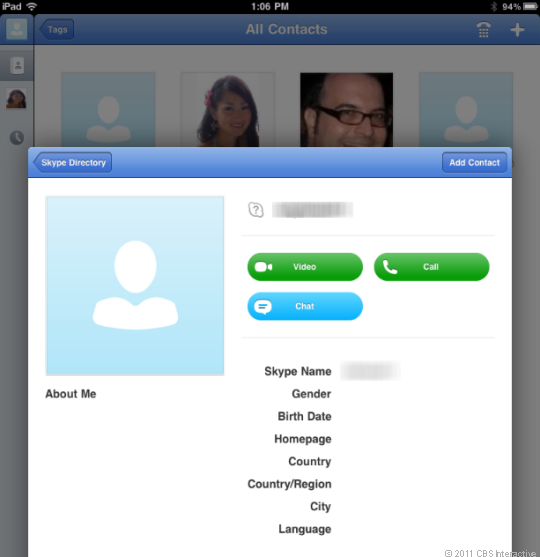 Skype for iPad also features a redesigned contacts page that looks a whole lot like the iPod/iTunes album view. Skype Out credits are also supported, but cannot be bought in-app.

Skype is definitely giving FaceTime a run for its money with the ability to make video calls over Wi-Fi and 3G. However, word on the street is that iOS 5 brings FaceTime over 3G support. Watch out, Skype. Apple is on to you.

The only major feature that FaceTime has over Skype is the native integration across Apple’s products. Skype’s chat functionality also makes it a more full-featured service.

What do you think? Why are you excited for Skype on the iPad?